We are launching not one but two free beginners courses, the first will be Monday evenings starting on the 12 January with Glenn.

The second is daytime with Portia starting on Monday 19 January

All the details and how to sign up are at:
https://www.redwayrunners.com/train/beginners/

Please do pass on this information with anyone interested in starting running or coming back to running.

It is that time when we have been reviewing the club clothing prices, you know how this story now goes normally….

Anyway, we have managed to negotiate for our members a better deal – therefore from the 1 January 2015 – the prices of virtually all club kit is being REDUCED– we will have the new form loaded on the club shop on the 1st January..

For example the club tee shirt (Unisex or Ladies) will be reduced from £11 to £9.50 and vest from £9.50 to £8.25 and these include a name one side. Couple of the smaller selling lines are staying the same price and the Children’s cotton tee is going up by 10p.

For any member who has not taken advantage of a ‘one item (tee, vest or child’s tee) with a £5’ reduction by 31 December – this offer finishes on 31 December – you get the best price on this offer – but you have to get form and payment to us by midnight NYE

If only Redway Runners made Lager!

We are having an extra club run on New Years eve, forget your Ultras and long distance running this run will take 2 years, we will start the run in 2014 and finish the run in 2015!

At the end we hope to have a bonfire going so bring some nibbles/marshmallows to roast and a drink to finish the night/morning off. 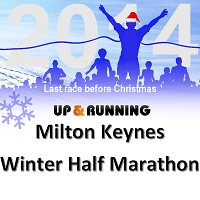 Great day at the Up & Running MK Winter half on Sunday with loads from the club taking part and also many helping around the course. We even came away with three club runners picking up awards (picture below) for Caroline Beechey, Gavin Lucas and Maurice O’Connell – well done

We also manned the water station at mile 9 (picture below) at Tear Drop Lakes organised by Diane, which included Paul the Christmas Tree.

Well done to all that took part and helped on the day.

For Mel Jordan the half was her first and she said
‘As you were aware this was my first Half Marathon. Last night I was apprehensive as I didn’t know what to expect, this morning I felt sick and I could of cried when I finished. The kindness, encouragement and support that I received from other Redway Runners has been absolutely brilliant from those running and those helping. I couldn’t have done it without them today. Thank you all 🙂‘ Mel

From Rob with a message via Facebook
‘Just wanted to say thank you to one of your runners for being my pacer. I don’t think she realised she was one but with the green top she was easy to spot and was going at a good pace for me. I was the one singing in a red top

David the race director of the event said
‘Diane and the gang did a great job! I was there this morning to clear up and it was all spick and span.’

James a runner at the event
‘I said to my fellow running son, we will do this one again! Can you believe locals loaded up their children who gave out jelly beans en route and in addition to the water stations and gel/jelly/bear give-aways? And I have never seen so many Redway Runner t shirts – they kept me going in the 16-19 zone when I was flagging! Thanks to all.’.

Another fantastic Redway Runners Christmas party last Sturday – during the evening we drew the 4 club paces for the Virgin London Marathon 2015 and the members pulled from the hat (well bucket) were:
David Stride, Dawn Blaber, Andy Sangster and Maia McQuarrie – well done your journey begins.

Thanks to all those that bought children’s presents for Barnardos – we will be getting them passed on over the next couple of days.

We raised a massive £502 from the raffle we held and that money will be going to the clubs Charity of the year. A full list of all the raffle winners is now on the club web site at:
https://www.redwayrunners.com/christmas-raffle-2014/ If you won a race entry then please contact Jonathan Clements for info on how to claim. If you do not have details of the prize you have won contact Martin or Julie

So many thanks to Julie Martin and everyone else that helped to make last night a fantastic evening.

Finally we have booked next years for Friday 4 December 2015.

Places are limited and it is likely to fill up fast, you need to book – full details are at:
https://www.redwayrunners.com/train/beginners/ 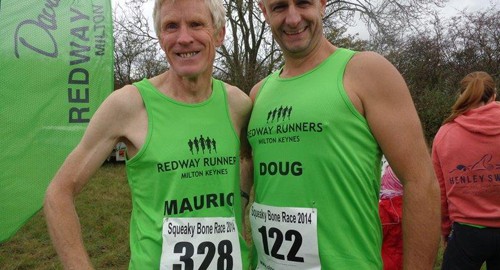 Last date to receive clothing in time for Christmas (and also new year) with payment and form is by close Sunday 14 December – except for the Embroidered items these will be need to be ordered by close Tuesday 9 December (Embroidered items are Green hoodie, caps and beanies)
Shop info at:
https://www.redwayrunners.com/shop/