The main events are on Sunday 14 October – all the details are at:

Still time to also look at the May 2018 trip to Riga, Latvia

Entries are now open for the Redway Runners Festival of Running for 2018, at Caldecotte Lake we are running with our friends at Enigma Running

These events (except the Marathon) are exclusive to Redway Runners initially

For all the details and to enter go to: 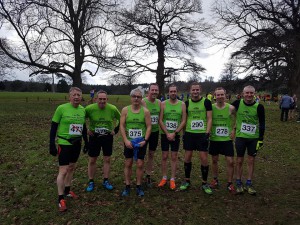 10 hardy Redway Runner souls ventured into deepest darkest Bedfordshire on Saturday afternoon for a frolic in the mud at the Combined Buckinghamshire and Bedfordshire County cross country championships. Held in the palatial grounds of The Manor House in Shuttleworth we were surrounded by 425 acres of beautiful parkland and a stunning building designed by prominent Victorian architect Henry Clutton. Apparently, the building contains many fine examples of 19th Century Victorian paintings by artists such as Sir Frank Dicksee and George Cole, sadly we had little time to appreciate the architecture or the artwork as we slogged our way around the 425 acres of ‘gently undulating’ parkland. 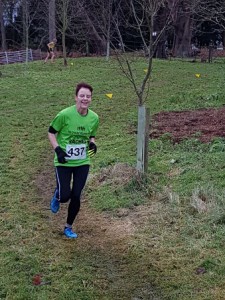 Those familiar with cross country will be aware that course measurement is somewhat subjective and one always arrives at a course with the hope that the officials have overestimated the distance rather than underestimated it and that the undulations are rather gentle as opposed to ridiculous long drags. Well dear readers and fellow Redway runners, the officials in this particular race had certainly used the beautiful landscape to its maximum potential by making us run up any slope, hill or incline. These included incredibly long painful drags that went on for ever and short sharp climbs just to make the legs and the lungs burn right at the point one was ready to give up. 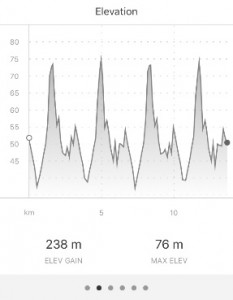 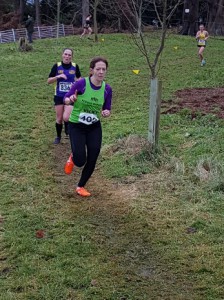 And as for the distances, well, one would have thought that with two counties worth of officials then the distance would be vaguely close to the estimate Oh how wrong we were…. It became clear after the first lap of the men’s race that the ‘estimate’ of 11km was considerably out in what eventually became a 25% under estimate with the eventual distance being almost 14 km !!! Talk about hanging on during the last lap !!! The ladies faired no better and were equally faced with a 25% underestimate where they were supposed to run 8km but actually ran 10km !! But where would the fun be in cross country without mud, hills and vague guestimates of the distances to be run.

As the observant of you will note, there were eight men competing and so far, we have only mentioned 7, well one of our members was lucky, it seems that the officials were treating him with special dispensation, he had a bright red line across his number and that indicated that he belonged to a different class of runner. Luckily for him that meant he didn’t have to run as far and did one less lap than us !!! Once we realised how far we had to run, it was incredibly tempting to find a pen and put a red line across our numbers and join Derek on his shorter run !! Mind you, Derek didn’t have it all his own way as he had to still do the hills, rain, wind and mud 3 times and finished a fantastic 3rd place in his age category.

The ladies were brilliant in their vocal support of the men and clearly enjoyed the suffering that we endured, but clearly didn’t have to be too gleeful as their time was yet to come !! Redway runners were represented by two brave ladies who ventured out to Bedfordshire, both runners did fantastically well, battling not only the landscape but the weather conditions which had turned somewhat damp and chilly by the time their race started !! Rachel Edwards was first home in 9th place and 1st in her age category and Victoria Berry, running for the first time ever in spikes (brightest ones I have ever seen ) chased Rachel home in 10th place overall and 3rd in her category.

With regards to overall team positions we had enough to score in the Men’s race and finished 5th team overall with a combined time of 5.57.25 and in the Veterans race Redway were 3rd team overall with 3.59.18. Target for next year is a podium finish in the Seniors team and to win the vets category by making sure we have a full-strength team

Fantastic performance by all, well done. Onwards to the next Chiltern League race at Keysoe on Saturday !!

https://youtu.be/PT-bZTM6C5YThis takes you to our photo review of 2017

Final club review in words at:

We also have Reviews of the Year from our members on the club web site with:

By the end of 2016 I had been running for a few months and somehow getting caught up in all the excitement led to me booking my place in 2 marathons!! I had never really run with people other than Parkrun’s of which I’d completed 29 and after forging ahead managed to complete the winter half (my first half and longest run) in a respectable 1.49 before the close of that year but I knew 2017 would present some challenges….

The year started with a huge high, after some Strava banter I met up with a fan of mine Nicky. She made quite the impression during our first parkrun together, swearing most of the way round! I then took up the New Year’s Day opportunity to run to Willen and complete my second parkrun of the day. I think this was the main difference (there’s been a few) with my running this year, having the confidence to run to runs or put in additional miles before or after planned outings.

At this time Nicky was running with Sweatshop running club and I joined her for a couple of their evening runs…… after a couple of conversations with Martin I took the plunge and joined Redway Runners. I picked RR due to the huge amount of different runs starting all through the week, it just worked with me and my shifts at work – Martin had also mentioned they would be doing marathon training, just what I needed. I attended my first run on the 8th Jan, a Sunday club run hour…. plus a bit extra! This was my introduction to the colossal size of the club and Martins time keeping!! January also saw me on the track for the first time since …. School probably, another dimension to the club runs and one I utterly enjoyed.

February and March saw the introduction of Beat the Street in Milton Keynes and it’s fair to say no-one embraced this more than Martin, with runs being centred around collecting as many points from the blasted things!! After a little bit of moaning I managed to steal Nicky away from Sweatshop to her new home with the Redway runners and set a PB of 45mins for my 10km during the chicks & chaps series.

In the run up to my marathons I tried my hand at a mixture of the runs being offered by the club including Friday mornings, Sunday social, weekday intervals and tried to go to parkrun as often as I could. Me and Nicky would often hashtag runs and ensure selfies were taken while getting as much enjoyment from every run. In the first few months of 2017 I got at least 5 of my non running friends to lace up and join me, which I am very proud of!

March saw my first real run with a target for the year, Silverstone Half! I don’t normally set targets, and I certainly don’t advertise them ( fear of failing I think) but I set a target of 1.45 which after my winter half time I thought was realistic, I was very happy with my 1.41 but also with the way I still felt strong in the closing stages. It was also great seeing a few friendly RR faces there. 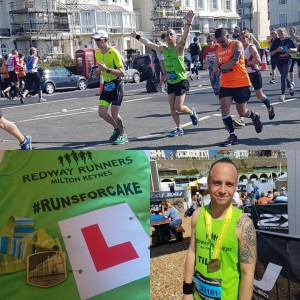 April was about one thing….. BRIGHTON marathon and after completing all my training during the chilly months you can imagine my excitement at the announcement that it would be run during a heat wave yay!! And WOW was it hot! I adjusted my game plan slightly walking through the water stops towards the end and made it,…. Just! 26.1 miles is a LONG way and do not let anyone tell you different! Completing under 4 hours was a huge buzz (3.51) as was the support from the crowds and Nicky who made the trip. The beer afterwards nearly knocked me off my feet! I was surprised how uncomfortable running was for the next few days but with the support of Nicky and the club runs I did get moving and eventually back to something that resembled a run, about time to because May brought with it the MK marathon! Although I may have felt ready for this, looking back I don’t think my body had long enough to recover from Brighton however I completed it and that really was the target for this one, I surprised myself a bit with the time, in that it was exactly the same as the previous one.… Mr consistent! Annette’s beginners group had a surprising amount of ‘helpers’ the following day. 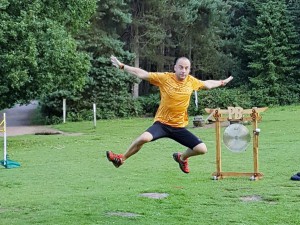 The following months saw me helping at beginners groups, completing a round MK relay, marshalling and tourist running at a couple of different parkrun’s including Northampton, Rushmere, Buckingham.

In July and August I tried to do a bit of speed work, on one occasion I got Nicky on her bike to pace me which was certainly an interesting experience and I was on the track again which I hope to see more of in the new year.

I managed to find to time to set a fastest mile of 6.21 during the RR green mile but also have lots of fun during every run I got to including both mine and Nicky’s 50th Parkrun, which was made extra special with an appearance from Greg Rutherford. 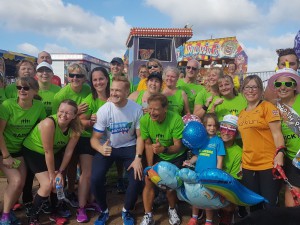 September saw my next challenge in the Bedford half. It’s fair to say I was not feeling this, very much under the weather in the run up to it, struggled massively after 8 miles but found some strength towards the end and completed in 1.39! mixed up things towards the end of sept by attending a few of Katie’s killer classes. October brought along the fun of a treasure hunt, dressing up and winning costume award at Halloween parkrun.

November I dragged myself to the 6.40 club…. Thanks Paul, man those guys are fast, pushed myself and very happy I did, getting quicker is certainly a target for 2018. Sadly in December the winter half was cancelled due to snow….. and yes it did actually snow, very disappointed I went out and completed 15 miles anyway and it was beautiful. That’s about my year, December has seen more dressing up, (and down). I have wound down my running miles but still completed over 1,300 miles this year. 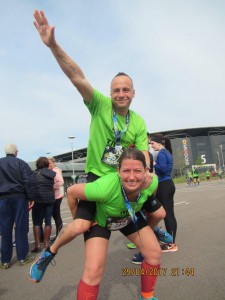 2017 has been a fantastic first year for me and running, aside from a couple of small injuries I have smiled, laughed, and giggled more times than I could even try to count. I’ve met some lovely people and made some amazing new friends for which there are so many memories from Janet stripping in the woods to Nicky running down Bow Brickhill hill quicker than I ever seen anyone move. I’ve been introduced to the social fun side of what I still believe ‘outsiders’ think we are crazy for doing. (sometimes I even get close to agreeing with them!)