Back in December 2016, I’d just moved to Milton Keynes and decided that my New Years resolution would be to meet new friends get healthier and fitter….and today, the shocking realisation is that 2017, has been the only year I actually stuck to a resolution!!

I’d made my own attempt at the ‘Couch to 5k’ program and I have to be honest, hated every step of the way – up to and including a crawl around Park Run.  However, a friend of a friend mentioned Redway Runners and I thought I’d have a look.  Being inspired by other views of the club and the shared success stories – that sensible part of me watched as the crazy part sign up a beginners course.  Whaaaattt….  a course in running, are you serious….???

The ten weeks went so quickly but with the gradual increase in distance, I found I started to enjoy it (that’s more of a shock to me than I realised!) 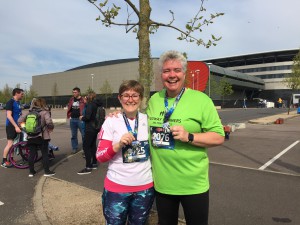 From the graduation Park Run in March, I then completed the Rocket 5k and got my first running medal.  It’s now hung proudly on my home office wall along with other ‘bling’ I’ve picked up over the past year.

Part way through the beginners group, a very dear friend lost her battle with Cancer, so I decided that if she can go through what she did (6yrs of chemo, surgery and radiotherapy), then there’s absolutely no reason why I cant go through the pain of training for a 10k to raise funds for Cancer Research. 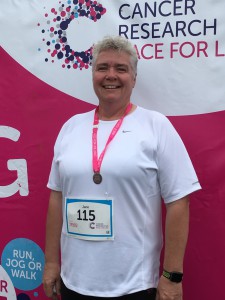 Not only did I train properly for the distance, for the first time, I blogged about the whole experience.  In reflection, I think that sharing with family and friends what I was doing – the good, the bad and the ugly parts of training, was tougher than the run itself.  Hugely motivational and inspiring but very exposing!

The end result of this was that by harnessing the power of social media, I managed to raise in excess of £4,000 for Cancer Research and I was now firmly hooked by the running bug.

For the reminder of the year, I completed the Treasure Hunt 10k , The Furzton Relay,  the virtual MK50 and of course, the Santa Dash.

My motivation dropped a little in October when I managed to pick up a knee injury (twisted it getting out of the car in a hurry!).  But now with the help of Rudi Chaplin at the Treatment Lab and training plan from Clean Coach Katie – I’m inspired to plan my running for the next year. 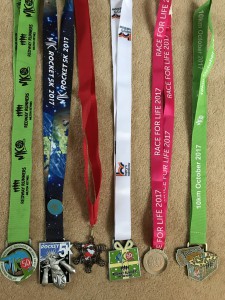 As I look back over the past 12months now 3 stone lighter and at the small collection of running medals, I get a real sense of achievement.   None of this would have been possible without the great community and support from RRs and the great friends I’ve made along the way.

Looking forward to seeing what 2018 has to offer.