Another winter had passed with no running and I had signed up for the Festival of Running Half Marathon, my first race at this distance. I wasn’t a member of the running club at this point nor had much exposure to it as I was only running 50miles or so a year. It’s a race I won’t ever forget, my last one before joining the club and one with many mistakes. I remember the flooded underpass at mile 1, wearing too many layers, the heavy wind, poor pacing, seeing Nev cheering at the Redway station and being so surprised at the amount of cheers going to all of their runners despite the horrible weather and then the 2hr pace setter overtook me near the finish. I finished a broken man in 2hr 2mins and enough was enough – I was running with Redway Runners the very next week. 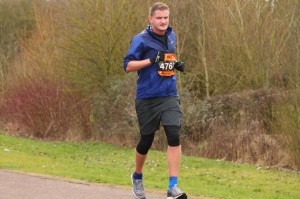 With the motivation of the wedding coming up everything changed and I was hooked. With two months of running with the club I met lots of new faces and soon got into a routine of running. I signed up for the MK Half which was on the 1st of May with a goal of just setting a new best time. It was such a great experience and well supported half. I quickly found myself running in a group with the 1h 45min pacesetter and it felt tough as we approached the centre of Milton Keynes. I found my rhythm and even managed to pull away from the pacesetter as we approached the halfway point.

The great support continued and with it being my first race in the club colours I soon began to understand what a family it is and what a difference having your name on the top really makes. ‘Come on Munns, ‘Come on Redway’ it was awesome and really push me through the middle phase with some quick splits. As I approached mile 10 I began to struggle with the pace slipping back to 8minute miles but still ahead on the 1m 45 pacer and now on the homestretch. I remember running into the stadium for the finish like it was only yesterday, such a fun way to finish the half. James Fuller one of the club runners was there with his family and cheered me on to finish strong, I found some more speed and overtook a few runners near the line and finish in just under 1h 43mins, the best feeling ever. 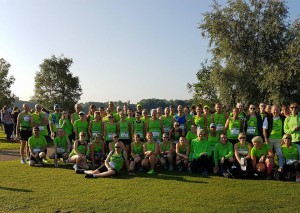 One of the toughest moments of the year was near the finish at the Bedford Half, which was the first weekend after the honeymoon. I’d stopped for the third time at 12.5 miles, the PB was no longer in sight and I was broken. Like a ray of light out of nowhere Julie from the club appeared and gave me a simple ‘come on Ben, jog it home’ She was taking it easy as part of her Marathon training for New York and the Chester Metric but it was such a massive help to get me over the line – Thanks again Julie!

Joining the Chiltern cross country league on Neville’s recommendation was another great experience, it’s a great way to keep running over the winter and it’s just so different to any other form of running. The best thing about cross country is the support we get from the Redway women who always hang around to give us encouragement. 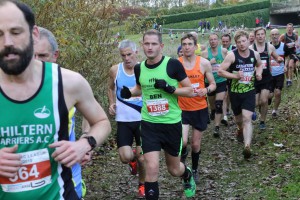 In 2017 I received the fantastic news that I had been given the opportunity to run in the London Marathon 2018 on behalf of Cats Protection and progress one of my life goals. I was in complete shock to get the good news, such a scary proposition to run 26.2 miles especially after only recently joining a running club and having such a tough time managing only half the distance

Anyone who knows me will be aware that I adore cats and the Milton Keynes branch is all run by volunteers in their spare time and own homes. All your kind donations will go towards helping cats who are desperately in need of your support.

Please, please, please be so kind and sponsor me if you can! Every donation, no matter how big or small, will go a long way in helping me to achieve my fundraising target.

As an extra bit of fun anyone who donates £30 can choose ANY song for me to listen to on my run. I will pop round to see you so can add this my marathon playlist (Please be kind) and I won’t look at it before the big day!

If you would like to sponsor me, I have a Just Giving page here:

On the 6th on November it became Facebook official, I had been selected as a sponsored athlete for 2018 with The Treatment Lab and Clean Coach Katie. It felt great to get this good news and it gave me such a boost knowing that Rudi and Katie will be invested there time in me and my marathon journey. The prize consisted of monthly treatments with Rudi with more nearer the marathon, PT sessions with Katie and access to the weekly classes. Having this support is great especially with me having the added pressure of fundraising for the marathon. As part of the sponsored athlete programme it advised we should make a blog to diarise our progress but since starting this I have actually really enjoyed recapping my year so if anyone wants to hear more of my rambling visit my blog at the http://thegreenrunner.co.uk/ it’s still very much a work in progress but it’d be great to get anyone’s thoughts.

It’s hard to really quantify what a difference the club has made me but in simple terms it meant I could lose weight, marry the women of my dreams and feel great on my wedding day, all down to the club and for £5 a year, wow what a bargain. As well as that I have met some fantastic people, I remember looking at Strava and it told me I’ve spent 41hours running with Maff, 27 with Jen and didn’t even know them until May. I have made some great friends in such a short space of time especially with the small but awesome Wednesday 5am group. Everyone from the club has been so supportive and invested in me, even Martin seems to know when I’m running a cross country event despite the club having over 1400 members and even made comment at the latest club run that I’ve had a good year which was fantastic to hear. 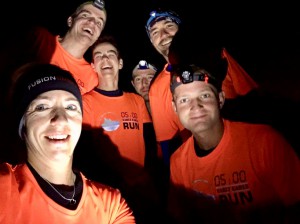 I’ve been rambling on for ages now and not even mentioned the sub 20 parkrun or dirt half race – for those you can visit my blog but for those who like numbers here’s a statistical representation of before and after joining the club:

Plan for 2018? Complete my first Marathon, beat all of the above and make more friends with the club trying to give back more with parkrun’s and supporting the graduations 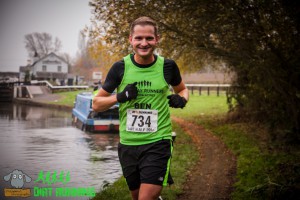