Start: The Black Horse Pub car park: Ros to do welcome and intro 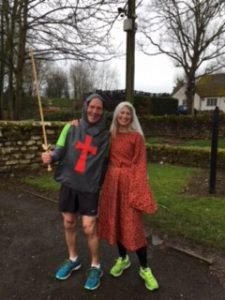 Stop 4: (loop back over canal to) Brick Kilns   Jim

Stop 5: (loop back over canal to) Bolbeck Park:  Ros

Welcome one and all, Lords, Ladies, Knights, Squires, Aldermen, Goodwives, Villeins, Peasants and Serfs of MK, Lady Rosalind and my trusty Squire Jim would like to invite you on a history run around north east MK where historical treats will be revealed, some of which may reveal to you why MK has been on the map since 1066. The run will be about 90 minutes with a couple of stops every mile to take note of some fascinating historical feature of interest and will be about 6 miles in length. It is suitable for all abilities and there will be a quiz with prizes at the end and coffee and tea and bar snacks are available in the pub afterwards at a cost of £2.50 for beverages. Be prepared to volunteer to dress up, read out a clue if you wish and have fun! The tail runners are …….and ……. who will wait for everyone. Ros and Jim are the run leads and the clues will be read out when everyone has arrived. Enjoy! Our battle cry to Stop one is one of the medieval knights Deus Vult or the French Dieu veut: God wills it! So whatever or whoever your God, Dieu Veut!

The stones in the circle were dug from this quarry. If you look closely you can see fossils of shellfish such as oysters.

The stone was used for local building and can be seen in the nearby arts centre and St Andrew’s Church in Great Linford which was built in the 13th century. Stone was a very important building material in medieval times and it is no surprise that the highly prized lands of MK contained a quarry for the medieval buildings of the day.

It is known as Blisworth Limestone because it was first studied at Blisworth in Northamptonshire when the Blisworth tunnel on the Grand Union Canal was being dug.

We are in 1066 and the Norman Conquest has caused the defeat of Harold at the Battle of Hastings. William the Conqueror is rewarding his Knights with lands across England. Walter Giffard, the Lord of Longueville in Normandy and head of William’s army was rewarded by William with the beautiful fertile lands across Buckinghamshire, including the lands upon which we run in MK. His son Walter was commissioner of the Domesday book in 1085-6 and recorded 13 villages in the Milton keynes area, including Linforda the crossing point of the river Ouse near the Linden trees.

The Lord of the Manor would have lived at Great Linford Manor, though the medieval manor was replaced in 1678 by the one now lived in by Pete Winkelman, the owner of MK Dons who uses it as a recording studio and family home.

Saint Andrew’s Church was built in 1215 using the local Blisworth Stone and has been a place of worship for 800 years.

it is no surprise that the Lord of the lands of MK, Walter Giffard, has a whole estate named after him! He was a remarkable Knight, who fought in the Crusades 1064-5, was one of the first Knights to go on pilgrimage to the Compostela de Santiago in Spain and was the standard bearer of William the Conqueror at the Battle of Hastings. As a reward for his participation, Walter was granted the feudal barony of Long Crendon Buckinghamshire comprising 107 manors, 48 of which were in Buckinghamshire. records tell is he had a shock of white hair and was an elderly Knight when he gained the MK lands.

Thanks to the boost our medieval post-Norman Conquest Knights gave to this area, further investments were made in these lands over the centuries. The canal opened in 1805 and these brick kilns were built shortly after and used throughout the 19th century until they ceased operation in 1911. The ponds behind the kilns are landscaped clay pits where the raw material used to make the bricks was dug. Not only was this area rich in Blisworth stone, but the local clay, which budding gardeners in MK find a pain nowadays, proved vital for the brick-making industry and for the local brick-built houses we see in the Victorian houses in New Bradwell and Wolverton.

The bricks were transported by horse drawn barge and used locally in Wolverton, New Bradwell, Cosgrove and Castlethorpe.

And here the story gets even more exciting: Hugh de Bolebec, a relative of Walter Giffard, lived in the medieval Great Linford Manor in 1066 and came from the town of Bolebec in northern France. As a tribute to him and to the Knights of the Norman Conquest, most of the roads are named after key figures in William’s conquering army. As we run through Bolbeck Park take note of the Knight’s names:

Lacy drive: is named after Walter de Lacy and he was rewarded with lands in Herefordshire; Lascelles Close: The de Lascelles family came over with the conquest and settled in Yorkshire – the family still lives at Harewood House in Leeds.

Mongomery Crescent: Roger de Montgomery gave William 60 ships for the invasion fleet and though he was in Normandy managing the lands during the conquest, he was richly rewarded for his loyalty with Arundel Castle and the earldom of Shrewsbury in 1067.

Redvers Gate: Richard de Redvers was a Norman Knight who was created Earl of Devon

Venables Lane: Gilbert de Venables fought at the battle of Hastings and was given lands in Cheshire for his loyalty.

Willen was an Anglo-Saxon village meaning ” at the place of the willows” even before the conquest.  The road names reflect the post invasion Knights – Verdon Drive is named after the lords of the manor of Willen the de Verdons. One great heiress in 1205 was called Rose de Verdon and there was a great scandal in 1285 when Richard de Verdon married Alice the daughter-in-law of the lord of the manor of Shenley without her guardian’s consent causing conflict and lawsuits between the de Vache family of Shenley and the de Verdons of Willen and eventually the lands in Shenley were divided to resolve the dispute.

We have heard that the village of Willen pre-dates the Norman Conquest so it is safe to assume there has been a church here since that time. The current church was completed in 1680. It was designed by Robert Hook who you might remember from your science lessons at school as the man who developed Hook’s Law of Elasticity which states that “in a spring, the force is proportional to the extension”.

This was important as it allowed the invention of an accurate timepiece crucial in determining longitude which was a problem for navigators.

Hook was a remarkable polymath. Meaning he was an expert in many fields such as architecture, mechanics, horology, microscopy, biology, palaeontology and astronomy.

I want you to imagine that you were standing on this spot 100 years ago. There was no motorway or new city of Milton Keynes, just gently rolling fields. You would have been standing at the front gate of Tongwell Farm from which this industrial area takes its name. There was also Tongwell Brook which flows into the River Ousel and a field name of Tongwell is the oldest record on a map of Newport Pagnell in 1806.

The line of trees running along the verge marks the course of the Newport Pagnell Canal which ran for 1.25 miles from Linford Wharf via 7 locks to The Green in Newport Pagnell. It opened in 1817 and closed in 1864 with part of the course being used for the now defunct railway line from Newport Pagnell to Wolverton.

Now back to the Black Horse via Linford Wharf and the Quiz. Dieu Veut!