We go on the run with our members and we find out a bit more about them – which we thought would be great to share, this time it is Janet Maidment, who it has been great to see come right through the club from nervously joining to seeing her terrified when her name come out of the hat to do the London Marathon from the club ballot.

May 2013 when I joined week 3 of a beginners group

The camaraderie and support. Knowing there is always someone there to run with.

A lot. I’ve made the best friends through the club.

Tell us about your first time (with Redway Runners):

I went along to wk3 of a beginners group and was shocked to discover we had to run for FOUR minutes (walk two). That was about three and a half minutes longer than I thought I could run for. Really struggled but persevered and went back the following week!

Usually Monday’s, sometimes Thursday intervals and often Sunday long runs. I try and get to track when I can too. I run with lots of different people but special mentions to Pet, Paul, Suzy, Angela and Lorraine who always keep me going.

I didn’t run from the age of 13 when I developed asthma and always used it as an excuse not to! I watched my husband run and supported at marathons for years and had absolutely no desire to run. One day I just thought I would give it a go. Now I wish I’d done it sooner than aged 36! I went from beginner to marathon runner in three years.

Running the London Marathon in 4:49 before my 40th birthday!

Most people know I’m pretty oblivious to everything whilst running so who knows who I have missed out on seeing!

At the moment it’s up in the woods – anywhere trail.

Just recently a few of us managed to get ‘lost’ in the woods and ended up in the middle of Woburn Golf Course whilst it was hosting the Women’s Golf Open. A run I will remember for a long time as there was so many laughs, fence climbing, trying to negotiate our way back and just enjoying running!

Tell us about your worst run:

Great North Run 2015. I just didn’t enjoy it. Too busy, boring route and my personal worst half marathon time.

You never regret the runs you do, just the ones you don’t. 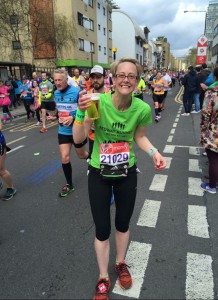 Two – 25k into the London Marathon and I stopped for refreshments, finish photo with my medal!

Yes! Post Marathon Blues are the worst! I found it again by learning to enjoy running with friends who make me smile and reminding myself it’s not always about pace and PB’s.

Hmm, generally yes unless I’m dying. Often to the nearest half (and a little extra for Strava)

I learnt that I am capable of running a marathon – who knew?! I wouldn’t change anything (except maybe having more faith over the last six miles that I had it in me to finish!).

Nothing – it’s one of the reasons I love to run

Trails and intervals for different reasons. Trails are just fun with no pressure, Intervals are hard work but you get to stop (generally) after a short time – I like that

Loop backs have their time and place. I didn’t enjoy them during marathon training so tended to avoid them then.

If you don’t share your run in social media, did it happen? Where do you log your runs and do you stalk others runs:

If it’s not on Strava it didn’t happen! My runs automatically log to Garmin Connect, Strava and Fetcheveryone. Of course I strava stalk people!

Favourite race distance and why:

Half marathon. Because although it’s still hard work I can go at a more comfortable pace which is beneficial being asthmatic.

Tell us about your pre-race rituals and food and drink:

Cup of tea and an instant porridge. Home-made flapjack if it’s a long race.

Favourite race/event and why:

London Marathon. It was just an awesome event, the crowds, the support, the medal, the feeling of being #oneinamillion

Favourite parkrun and why:

Glossop parkrun. Although it’s a three loop course and I generally dislike loops, the course has varied terrain and it just made me smile the whole way round.

Asthma inhaler! Without fail I carry it with me.

Well I done Oakley 20 to get the jumper so yeah, I guess so!

I’ve considered it. The racing aspect puts me off rather than the mud!

Well as I’ll only ever win a novelty race (backwards running anyone?) it has to be PB.

What is your next race?

I am doing Bournemouth Half in October and then I’m signed up to Paris Marathon in April 2017. There’s currently talk of a possible trail ultra for 2017 too!!