We go on the run with our members and we find out a bit more about them – which we thought would be great to share, this time it is with Martin Palmieri who only joined Redway runners just over a year ago but is now a key part of the club leading a beginners group for us and always helping on runs

I started running in March 2011 when my best friend from childhood asked me if I wanted to run the NSPCC half-marathon that year. He is the only person who could have talked me into doing something like that! I joined Redway Runners in the middle of May 2016. I had just got back into running after preferring cycling for a couple of years. I ran the Milton Keynes Half-Marathon a couple of weeks earlier and had a dreadful run, losing 25 minutes from my PB of the time. Steve Patey, David Rose, Ros Crawley and Glynis Wiles had all been nagging me to join and this seemed like the right time.

Without sounding too corny, it has changed my life. Running has always been my main way of de-stressing, but I had had enough of running on my own. I had lost all motivation. I have met more people in the past year than I had done in the previous 24 years since moving to Milton Keynes. We are a big family and the care we give each other knows no boundaries. Through all the support I have received along the way, I have achieved an incredible amount in the past year and I feel so much stronger mentally. My wife Nicola is not a runner, but has been welcomed into the family by everyone she has met.

Tell us about your first time? (with Redway Runners)

It was the old Monday club run from DL. Helen Wiggins was signing people in, as Stuart was not there. Nathan Rutherford was the first person I met and I ran with Glynis Wiles. I also saw Paul Mizon, who was in my tutor group at school.

I try to run whenever I can, but school commitments often dictate when I run. I am currently looking after a beginners group, so a lot of my running time is dedicated to them. Parkrun is an essential part of my week, as is the Sunday run. I do the Explorer Run whenever possible, knowing Tim brings cakes!

Without question, it was running the Rock ‘n’ Roll Liverpool Marathon in May this year. I ran the very first MK Marathon in 2012 and people who ran that day will remember how awful the weather was. I had a torrid time that day and it shattered my confidence. At Liverpool, I improved my marathon time by over an hour, so I could not be happier with how it went. Redway Runners helped me so much in achieving this goal.

Probably in Italy, where my parents live. They live at altitude, so it is very challenging. I always get strange looks from the locals when they see me running up the hill to the next village!

I love to see other people smiling and achieving personal goals.

With hindsight it was funny. On my very first Explorer Run a year ago, I slipped over into nettles and hurt myself quite badly. This was my introduction to Spencer, who carried out first aid on me. That evening I met Lucinda, Helen W, Pete & Kath Crawley for the first time. Tim often reminds me of that evening. What a welcome to the club!! 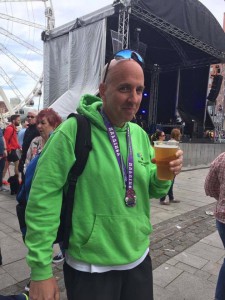 avourite running photo and why?

I have chosen this one because it was first beer in 5 months, after Liverpool Marathon

Of course! And I always add on a bit as Strava often chops a bit off!

I don’t do a lot of thinking, as I am always talking!!

I do love road cycling and have done some big sportives, but I haven’t touched my road bike in nearly a year!

That would be impossible being a teacher, though I don’t plan on being a teacher forever. I like the day time runs and do them as much as possible in school holidays.

What was your favourite race and why?

Apart from the Liverpool Marathon, I would say it was NSPCC Half-Marathon 2016, as it was my first as a Redway Runner. I ran it with Tim Giffen and he helped me go sub-2 hours for the first time.

Favourite race distance and why?

Probably half-marathon, as I have done 19 and it is a distance for which I feel comfortable training.

I would love to run the New York Marathon one day. I have family there and my grandfather was there during the 20s. I have a real affection for the place. Though as a Londoner, my bucket list entry is to do the London Marathon one day.

Favourite parkrun and why?

Milton Keynes will always be number one, but I also like Tring for the fact that it is a bit different!

A PB without question, as running is a very personal thing. Plus, I will never win anything!!!

Tell us about being a beginners’ run lead?

I was approached by Annette and Jonathan, whilst I was a helper with the previous cohort. I had mentored my friend Gill Firmin to run her first half-marathon in March, so I agreed to have my own group. It has been hard work and a huge learning curve, but as they approach graduation (two already have!), it has been incredible to see the progress they have made over the 10 weeks. The group gelled instantly and they have supported each other through thick and thin. I am very proud of all of them for what they have achieved. The helpers who have turned up week in, week out make all the difference. Of these, two names stand out. Steve Boothby and Sophie Phoenix have been with me throughout the journey and have stepped in when I have not been there. I would not have been able to do it without them.

Thanks Martin and good luck

First half as a Redway Runner. NSPCC 2016