The Redway Runners took to the home of The Beatles for the bank holiday weekend to take part in the Liverpool Rock’n’Roll marathon, half marathon, 5 km and 1 mile events.

Silence fell over the crowd of more than 20,000 runners at the race start as respect was paid to the victims and families of the Manchester bombing just days before. Runners and supporters showed their respect further by donning yellow ribbons.

The marathon and supporting events mark the end of the spring marathon season. Throughout the season, hundreds of Redway Runners have completed marathons and raised thousands of pounds for their chosen charities.

Martin Palmieri, completing his second marathon in Liverpool, describes why he decided to take on the challenge:

“I have been running for 6 years and completed my first marathon 5 years ago. It was the inaugural MK Marathon, which was spoiled by the dreadful weather. Since that day, I have always wanted to run another marathon to exorcise the demons of that day.
I joined Redway Runners just over a year ago and my running started to improve immediately. Following rejection in the London Marathon ballot, I entered the Rock ‘n’ Roll Liverpool Marathon.
I have done several running events over the years for charity and have raised over £8000 for a variety of charities. This time I chose Young Minds, as our youngest child has been treated for OCD and these lovely people’s mission is to support young people who are experiencing mental health problems. As a secondary school teacher, I am well aware of the lack of funding in this area. Young people have to wait months or even years to be treated.

Yesterday went very well for me, improving my marathon time by over an hour. I am also very happy to have raised over £1400 for Young Minds, thanks to generous donations from friends all over the world.” 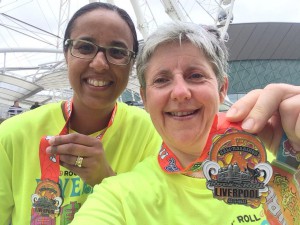 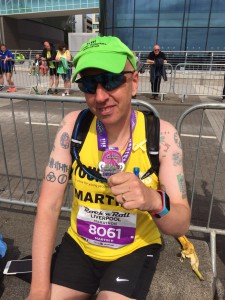