Redway Runner member, good friend and helper Sgt. Mack has had quite a year!  Below is his story.  It was good to follow his progress as he was well supported by Redway Runners members on his quest.  Well done Alan!!

Well what a year it’s been, some good some bad but most of all I made it! It was back in early 2015 I was having a conversation with the local help for hero’s agent after holding a fund raising event at my business Special Ops MK. Laser tag parties and Kayak hire. I was asking him (Mark) if he can think of anything I could do to help raise awareness for H4H that is different and will include my love for running! His reply came accompanied with a laugh “You

could run the MK Half as Hero Bear?” Yes ok I can do that, what is Hero Bear? Little did I know at that time what it would take to run a half marathon (MK Half 2015) in the Bear costume? Mark went on to explain that it’s normally used for 5k and 10k runs and promotional things when the normal mascot is just too heavy! Marathon bear is lighter by about 1k! 12kg compared to 13kg. He also said you’re practically blind in it so advised finding someone to guide me. So anyway that was how I was to run the 2015 MK half in May.

I then had a chat a couple of days later with my great friend Lisa explaining what I knew and asked her if she would guide me? Her reply was instant “Yes of course” We also roped in Kerry and Sarah to also help.

Well the big day arrived and we got our self’s to the start line and of we went, omg I was so not ready for the next 13.1 miles, first is just how bulky the costume and the head are, second is how hot I was getting! All my sweating was doing, was making the costume heavier.
Thirdly running almost blind was scary to say the least if not for Lisa I doubt I will have made it to the end unscathed.
Well one or two problems on the way round like my camel back water supply completely failing so by mile four dehydrating and having to steel other runners water from them and near the end coming close to crashing out when the reality of poorly maintained paths round

Mount Farm Park Lake, however we crossed the line at a painful time of 2:00:01 yes one second over two hours!!!!

That was it I thought Hero Bear was interesting and painful but not be seeing you again, however I didn’t take into account two things! one that 1 second!!! And I also watched a small video about the help H4H give witch had me in tears and made me think so what if the costume is uncomfortable its nothing compared to what I had watched in the video. I started to hatch a plan for 2016 in my head that I would try and raise awareness for H4H by doing as many Marathons Half Marathons as possible in 2016, 262 miles in total, unfortunately due to family bereavement and serious work

commitments I didn’t manage the 262, was in fact 145.1 miles.
So the first Half Marathon of the year Silverstone

Run with Lisa and Kieron as my guides, but the run didn’t go to plan because H4H had had a new costume made with better vision out of the Bears head but unfortunately the inner helmet that it’s all supported on was way too small for my head, so it just sat high on the top of my head which just gave me a splitting headache and by the end had started to take the skin of the top of my head. The following week was upper Heyford Air base Half Marathon guided by Emma D with no time to send the costume back to the makers I had to improvise a homemade pad to fit inside the inner helmet which did the trick for the day.
Heyford was fast just over 2 hours! I think about 2:02. Next came the Full MK Marathon Guides Lisa Amanda and Kieron. Sweat, tears and cramp especially cramp yes cramp! Did I mention the cramp? I think at some point every muscle in my body went into a cramp. However by just stopping every time to stretch and having Emma D (She’s a sport physio) at mile 12, 18 and 24 to poke and prod my aching body did the trick and with the amazing help of the guides we got to the finish only to then spend 30 minutes in the first aid room because I ate a Zero tablet instead of dissolve it in water! Made me very sick hehe witch sent the first aid teams into

melt down thinking I was about kick the bucket.
Next was the Redway Runner Festival with Abi and Kieron as guides, uneventful run if running with a torn hamstring.

Then one of the big ones for H4H Swansea Half they are one of the official charity’s for this marathon it was great because I finally got to meet Mim, my contact at H4H and the lady who sorts the costume for me each time. Once again my guides were Lisa and Kieron, it was a good run not fast but a nice route but it was a very warm day so dehydration was a serious problem! Seemed no matter how much I drank it wasn’t enough.

Two Hero Bears at the Swansea Half
Next was the Maidenhead half guided by Dr Emma, again quite a warm day which just makes it more uncomfortable so we just kept pushing to the finish, often when I cross the line at the end I have to sit down right away (Actually collapsed at Heyford!) simply because I am exhausted, however on this occasion a young and very excited St Johns ambulance lad came rushing over to take control of the situation! It took Emma 3 attempts to let him know that he was not

needed and she was a doctor anyway and was more than capable of taking care of her friend.

Then Planes Trains and Automobiles half marathon at Caldecott Lake, guides Kerry C and Kieron.

Not really much other than it went very well Kerry and Kieron were amazing and got a great medal.
Windsor half was another official H4H charity one, for this one we had a plan to try and beet that elusive sub 2 hour time, we didn’t know how hilly it was but I felt good at the start and it was not to warm, my guides were Lisa and Kieron once again. Even though the start for the first mile is up hill we got off to a flyer all was good until about mile 3 when the sweat had started to become a real problem by getting into my eyes, I had forgotten to take my sweat band so my eyes were burning and its imposable to wipe them while wearing the head.

time over two hours 2:02:41 to be exact, still Chris Evens mentioned Hero Bear on R2 the next day! (Hero Bear smashed Chris’s time ) Once again Mim and the H4H team were there which is great for their support and help.
And last but not least the MK Winter half with 5 guides! Amanda, Dr Emma, Kerry, Alex and Kieron. The toughest one yet simply because I had not run for over a month due to injury. We got to mile 11 and for the first time in my life I did not think I could push myself any further, was only when Abi turned up and started to take the micky that I managed to get moving again. They all managed to get me over the line in about 2:23.

I am not sure if I ever want to run again in the Bear costume! Perhaps if H4H manage to get me a place at the London marathon I think I would. Am I still wanting to do charity runs? I defiantly do but I need challenges and tough ones. I have still not found

where my limit is, every time I have got to a point where I thought I could go no further I then went further!
Same with pain I still hurt if I stub my toe or cut myself with paper but I can also lock pain away inside my head and not let it get in my way. I guess that’s stamina. One thing during all of the miles this year has been knowing that for me it will soon come to an end and I can get out of the costume and relax, not so for the guys H4H help every day of the week. Please remember they are in that position because they were protecting you.
Thank you for taking the time to look through this.
Also a massive thanks to my guides this year for making it possible.
Alan AKA Sgt Mack. 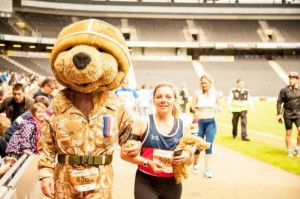 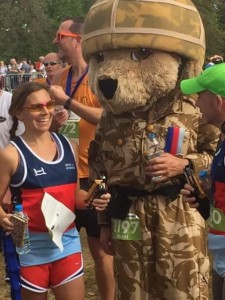 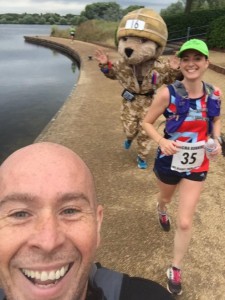 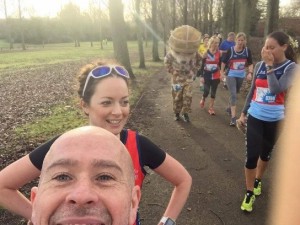 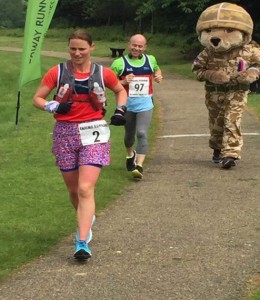