On Sunday, 21 July 2019, Redway Runners attempted something that had probably never been tried before with a drama run, the drama unfolded at stops along the run

It was based on the local true story of the wedding of Mr and Mrs Pedder in 1909. 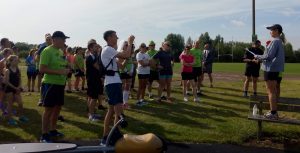 For the drama, the runs started in two locations, with the Brides group meeting at Giffard Park, where the scene was set, then moving along to Great Linford train station, where the runners caught the 9.25 Newport ‘Nobby’ train to New Bradwell.

Then Bride met the Groom run at 10am for the wedding at St James Church in New Bradwell joining the church congregation for an open services outside the church. 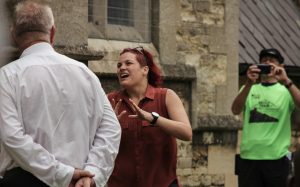 But dramatically during the rousing wedding service, delivered by our own Reverend Nathan, the wedding was halted, by the ‘Evil Mrs Beeching’ when it was announced, with some glee! the church which had already held almost 1,000 weddings was not licenced to hold weddings, instead the whole group celebrated in song a number of July birthdays

It should be added that later by an act of Parliament the church was licensed for weddings and all the previous weddings were made valid.

Left photo below, shows the Milton Keynes Parks Trust board at St Peters church which has the information about the Pedders wedding that our drama was bases on

Photos below include, wedding photo that our Groom, Colin told about his relationship with St James’s Church

Photos from Justin at:
https://www.dropbox.com/sh/w0uohtj0mc8qlrb/AADcTfxZX-J9I0TUpHFy5Lk7a?dl=0&fbclid=IwAR19kQ6atRciMQLa7V_d6Mwrc6kIQc69odFs1ACZCIuFS0_5VAXYSMK4F44