[av_textblock size=” font_color=” color=” av-medium-font-size=” av-small-font-size=” av-mini-font-size=” admin_preview_bg=”]
I had always hated sports whilst I was at school, and so I always avoided taking part. In 2010 I had my second child and found myself putting on so much weight to the point where I really struggled to walk. A friend of mine and I decided to start muddy obstacle racing. I later joined a team and started to lose some weight, I committed myself and also joined a gym and it worked. The weight came off and everything seem to be going well for me. We absolutely enjoyed mud running mainly because we were just fun runners. It was not a competitive thing for us but a way to stay active. 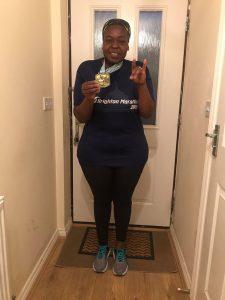 Everything came to an end for me in 2015 when I sprained my ankle and also struggled with achilles tendinitis. My ankle healed but the achilles didn’t, in fact it got so bad that I struggled to walk first thing in the morning. Whenever I would put my feet on the floor it felt like I was stepping on broken glass. I was put on the waiting list at the doctors and it took 8 months till I saw a physiotherapist. She performed acupuncture once a week for the next 2 months and was discharged and told do do some exercises. It actually helped a lot but I still couldn’t wear any flat shoes. I found myself spending a lot of money on trainers till I found the ones with the right sort of cushioning but by then I had put all of the weight back on. I felt awful, miserable, out of shape and most of all lost all my confidence. I was so disappointed with myself for letting myself go again especially with the fact that it had taken so much hard work to have lost the weight in the first place. I loved the cheese cakes!! I also stopped going out and lost touch with friends. My asthma got worse and I also started to compare myself to others, I had hit rock bottom to be honest.

I already knew about the Redway Runners because in 2015 I had sent Martin an email asking for help and he had replied telling me about the beginners group. In 2017 I joined the beginners group. I think it is fair to say if it wasn’t for of a friend and neighbour who gave me a lift, I probably would not have finished the course. We graduated on the first of July 2017, she decided that she was not going to carry on so I went to a Monday morning step up group. The group was too fast for me I struggled to keep up and decided that it was too much and that it.

Last year in May I weighed myself and I had gone over 16 stone. I reached out once again and found out about the Friday evening group and they called themselves the plodders. It was perfect!! I turned up and met Lotte with her group of amazing people and I felt inspired. For the first time in my life I had met these women who couldn’t care less about appearances. They were running and talking and encouraging one another. I loved being part of that group. Slowly I started to interact with them and felt like I belonged. Whilst reading through the Redway Runners weekly news update, I came across Annette’s Thursday Interval training. I did not even know what interval training was and I just turned up. I loved it and even became a bit competitive. 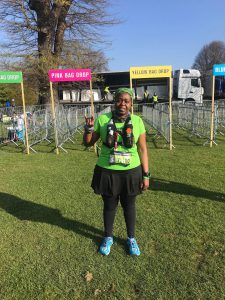 When I heard about the Zero to Hero program, I thought it would be a way for me to keep active and lose weight. As I emailed my application form, I remember thinking that there was no way they could accept someone like me. I mean I was just too fat and too much to handle, all my insecurities came flooding back. It came as a shock when I got accepted. I remember seeing a post on Facebook which read out “A goal without a plan is just a wish” and so I decided to start planning.

First of all I signed up to Brighton marathon. The Zero to Hero training was to prepare me for a marathon so therefore I needed to make sure that I attended all of the training and give it my best. I loved the Tuesday strength and conditioning exercises, not so much of the running as I found it very hard to keep up with the rest of the group. One thing that was a massive surprise was how well thought out the program was. We even had people coming in to educated us about healthy eating and different forms of dieting, which as exactly what I needed. We even had someone come in to show us how to foam roll properly and stretching too. Years back when I used to do mud runs I didn’t remember stretching at all. The sessions were very informative.

Sunday sessions were scary ones, tough but also rewarding. I also remember running with the team and struggling to finish but Portia was kind enough to let me finish early. I felt awful to a point where I later sent her an email letting her know that I had had enough. To my surprise Portia convinced me to come and give it another go. Since the first time that I had started the course, I had struggled to connect mainly because I had felt that I was too slow and that I did not deserve to be part of the group. Once most of the group had heard that I was struggling and wanted to quit, it was a surprise to me that some of them were also finding it hard as well. It was a turning point and friendships started to form and the long and dreaded Sunday runs became enjoyable.

When the Tuesday evening trail started, I turned up and met the most amazing people who would become my rock during the program. Although I was still slow, Jonathan and Janet who lead the trail group were very patient and encouraging and evening giving tips. We were running in the woods in the darks but none of them seemed to mind that I was slow and they continued to loop back and kept us all as a team. Whenever I felt like giving up, Portia, the Zero to Hero group, the trail group, Annette, Lotte, Nikki and Leah were there to get me back on track.

The Oundle 20 mile run was hard going, but the support I received on that day was out of this world. Coach Portia stayed and even ran with me the last hundred metres to the finish line. Brighton was a big day for me as it was the marathon that I had been training towards. Coach Portia, Paul and Victoria from the Zero to Hero team were there yet again to make sure that I finished the race. It took me six hours and forty-three minutes and sixteen seconds to finish. I look back and can’t help but feel so proud to have been part of such an amazing group.

I lost 3 stone and have become mentally, physically and emotionally stronger. Never in my wildest dreams did I ever think that someday I would be able to complete a marathon, especially after the problems that I had had with my achilles. Sometimes it is best to ask for help when you need it!! Thank you, Martin, Portia and the rest of the Redway runners for helping me fulfil a dream and become a more confident person. Thank you Portia and Maria for giving up your time, without asking for anything in return. Having Lester and Steve was brilliant as they also inspired me to carry on with the program.
[/av_textblock]