Months ago, I started to plan a big trip to the Garden Route from Cape Town in South Africa, quickly one idea was could I fit in some parkruns.

So a little bit of a look at the parkrun South Africa web page showed lots of parkruns in the country and that nearly all the biggest parkruns each week in the world are in South Africa.

The plan was for two weeks, but if I extended a few days I could get in three parkruns so the holiday was taking shape, fly in to Cape Town and do the  big one at Green Point park, then the next ones as the plans took shape.

Next idea was could I find any races for the Sundays, soon found the Cape Town 12K which looked like a big city race, so the key planning was done!!

Next thought better look at accommodation and searching the internet started and wanted to stay in different places and managed a good variety of places with a luxury tent on an Ostrich Farm a Stud farm, a Game Lodge, Winery and a Farm

After the overnight flight and finding out that the race organisors for the Sunday race were holding a 5K leg loosener on the Thursday and Friday from the Expo, seemed a good idea and only being about a mile away would be idea, well a mile away, did not account for a big wall meaning having a 2.7 mile run and a bit of a dash to make the start but made it and even pick up a free buff. The run was a nice way to see the V&A area of the city and manager a quick chat with one of the race organisors (photo below)

Karen had agreed to join me for the Friday leg loosener and we could also pick up our race numbers, but first need to do a bit of sightseeing around the Cape including a visit to Boulder Beach for the penguins (cute picture).

Anyway, had not taken into account how far we had travelled and the Friday night traffic so we missed the run, but decided to run along the sea front to the Expo including going past the light house

So day known as parkrun day and it was time for Green Point parkrun and first chance to get a photo with the run  director, great to see the familiar parkrun format and the same friendly welcome to tourists, the course was not as interesting as expected, but a nice finish in the park with token number 100 somehow seemed appropriate (not sure why). Then followed of course with post run coffee, well tea at the local food market just down the road with a great breakfast bap

On the Sunday we were entered into the Cape Town 12K, a new distance for us both, so guaranteed PB’s, the start was to the north of Cape Town and coaches seemed to leave at silly o’clock and it would be two miles to get there, so decided on taking a taxi to the start to make life easy, this was a pretty big city event with over 10,000 taking part all on closed roads, the start was with great views of Table Mountain as a backdrop and the run would be towards it, but as the gun went the clouds came in, so no great view, but slowly the cloud cleared and great views, as well as lots of bands and entertainment on route.
Started out thinking if could do it in under the hour, but as passed the first photo opportunity changed the plan and decided to take plenty of pictures on route.
A few neat features on the route including a 100-metre track, for the Bolt Bolt. 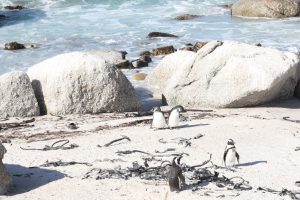 On the Monday we had moved on to Franschhoek, which is in the Winelands, on this run decided that I would run in each of the eight locations we were due to stay at.

This run was a lovely run from our French guest house and out to ‘Mount Rochelle’, Richard Branson’s, Virgin wine estate, from that through the vineyard and fields of grapes to the back of another farm backing on to the Cheetah enclosure.

After the run we caught the Wine Tram which is run along the old railway lines and takes people to the various wine estates for wine tasting and we might have sampled a few!!

After a fantastic drive along route 62, which takes you across the mountains we arrived at Oudtshoorn, which is a bit inland, our accommodation was on one of the many Ostrich farms and we had booked a luxury tent on the banks of the river, which sounded great but even with the heater on at night it was still cold overnight, so next morning we managed to move to a warmer lodge on the lake

The route of this run to be sensible was an out and back route, along the mountain pass, luckily it was ‘fairly’ flat, but the scenery was just absolutely fantastic think on the 45-minute run saw 4 cars so plenty of chance to enjoy the mountain air.

A busy road to run

Next up was George, named after King George III, and the guest house was interestingly called ‘the Three Fat Owls’, never found out why, the Friday evening on arriving found had a spare hour, so ideal time to get in a run, but it was late afternoon and in South Africa when the sun sets it gets dark very quickly. Anyway a run up the road bought me to a train line with a path alongside to follow but it got a little difficult to follow, so took a path to the left that went through the forest and went up and up and further up, each time thought got to the top it went up a bit more, but as was getting dark decided to retrace steps before got lost in the dark in complete darkness.

Saturday and George parkrun started at the Botanical Gardens just down the road, so a short run to the start, and a shout out for the tourists from England, a very wide start which was separated for runners, those with dogs and walkers, it seems South Africa are very proud of having so many walkers at parkruns and getting people active, which is great.

This route was along trails through the forest with a few hills included and near the end coming into the gardens, and we followed a strange path up an mound then came down again a bit like a helter skelter (photo does not do it justice), a very enjoyable run and a really scenic event.

Whilst in George doing some shopping, in the local sports store managed to by some running shoes, that were promoted as shoes worn by 7 Comrades marathon winners for 199rand, about £11 – got to be a bargain

Our next accommodation was at the Outeniqua Moon Stud Farm near Ruiterbos near Mossel Bay, this is a stud farm for the Percheron horse, these are big heavy horses that the world used to rely on for our needs for heavy lifting, but in this modern day have lost favour, the owner has a real passion for these fantastic creatures as she gave us a tour of the farm, and we even got a chance to sit on of the horses which is the biggest horse in South Africa, felt amazingly high up and the horses seemed very gentle.

Anyway, the run was from the farm and again went for an out and back route that was along the red dust track, during this run, which must have been in rush hour again only seeing 4 cars!!

Our next stay was at the Garden Route Game Lodge so plenty of animal spotting and several game drives, one of which included spotting for the first time the cheetahs 5 week old cubs, which were so cute, as well as seeing all the big 5 ( lion, leopard, rhinoceros, elephant, and buffalo).

One area, that did not include the lions or cheetahs, could be explored so a good place to run and plenty of Impalas taking a interest in the run

The next couple of accommodations, was not really sure what had booked, but it was a guest farm that included a number of animals, anyway we arrived and the owner was explaining things as Karen and I looked around for where we were staying, anyway the owner pointed to our guest lodges inside the enclosure on the side of the hill and only one of three cottages – stunning location.

Guess you know when you are a runner when the owner was explaining that the best way to explore the animal area is to self-drive the farm and you ask if you can run round and how far it would be (turned out to be 3 miles round the perimeter)
So, we drove up to the cottage, but had a new problem entering, as the giraffes were blocking the entrance!!!

So the run was around the farm and we came to the giraffe at first they were a bit nervous of us running but not sure if as we ran they were running away or alongside keeping and eye on us – but it was great running with them then spotting lots of animals round each bend, Loved the run so much that had to run again next morning before we moved to our last place of stay

This town we had been told was a ‘grubby’ little town, but the place we were staying was on a boutique wine farm outside the town, a drive into town and we realised the description was not wrong, but the bungalow we had on the estate was nice.

It was again Saturday and time for the Grabouw parkrun, the route description sound great and we thought we would run along a dam, but in South Africa a dam is a lake, it turned out it was the parkruns first birthday and they liked to have us as guests, it is a small event and the run briefing included an instruction not to get lost and if you do to head away from the mountain direction!!

The route was fab on the sand in the wood and open country, at finishing thought I had my highest parkrun finish token t number 17, but the results put me at 27, but later went back to position 17.

The run started opposite the bike hotel, which is where we went for post run coffees at the bike bar and was lovely to talk to other runners including the local parkrun ambassador.

The last run before heading home was round the wine estate, it was a small farm and a lap only took 1K so after numerous laps was a bit lapped out at 3 miles, but the dogs enjoyed running with us.

In summary, running is a pleasure in South Africa, of course you have to be a bit careful
parkrun South Africa has the same great format as the UK, they do have a real passion for walkers taking part and starting to get active and that has got to be a good thing
So, a great running journey was over too soon, it was varied it was fun and it every run was really stunning, it was a word used so much, but deserved

And those shoes that cost £10.99 deserved a photo! 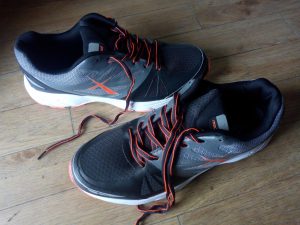