We go on the run with our members and we find out a bit more about them – which we thought would be great to share, this time it is James Dwight – who we talked with and do not think once he mentioned his football team!

Started running around 2011 and joined the Green Army shortly after in 20012.

Have you run with other clubs how does Redway Runners Compare?

If you can count Sweatshop as a running club I occasionally run with them but mostly run with Redway Runners.

Meeting new people, plus the social side is pretty appealing, as someone once said, it’s a drinking club with a running problem 😉 Seriously though the trips abroad have been the best thing about joining the club, would never have even thought about going abroad to run a race, now I prefer to race abroad than pay the extortionate prices to race over here.

Tell us about your first time (with Redway Runners)

Can’t even remember my first club run but remember the first trip abroad with the club to Barcelona, had so much fun and the actual race was fantastic. It was only my second half marathon and the difference between that and my 1st one was amazing, just wish my 1st run was with the club. The difference when you run with other people and have the support at the end is something you can’t ever underestimate….not to mention the ice cold pint of Estrella already waiting for me at the bar near the finish.

Mixture of Monday and Sunday socials, plus the club trips to Spain, not to be missed those trips.

Started running on my own around Tattenhoe to keep fit, then was recommended Parkrun where I noticed all these green t-shirts…..133 parkruns later and the rest is history as they say…

Finally breaking the sub 20 mins at 5K, still not come close but will get there again!

No ambitions as such other than to visit as many different parkrun courses around the country and spread the good word of the Green Army!

Spain, especially Barcelona, the crowd support was amazing and the freebies are always better than the UK.

Turning up to Cannon Hill parkrun in Birmingham one day to see Geoff New, Tony Daglish and Warwick randomly there. Had no idea they were planning on going and had to do a double take when I spotted another Redway Runner shirt in the distance!

What is your favourite running track and film?

I don’t listen to music while running, far too antisocial and seriously, it’s dangerous, don’t do it!

Tell us about your worst run

Silverstone Half, had to stop after 3 miles due to injury plus it was a horrible cold and windy day.

Favourite running photo and why 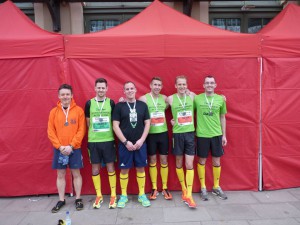 Barcelona half 2013, first trip abroad with the club and first time running abroad. The bright yellow FC Barcelona socks certainly got us noticed…

Quite regularly, usually when my hip starts to get sore after a build-up of miles but nothing a couple days rest doesn’t fix.

Willen Lake, just as it’s easy to get to from my house and it’s pretty flat.

Mo Farrah…if he could keep up with me…..

Worst/Best advice you’ve ever been given.

Never run a marathon and don’t ever intend to!

Anything but the actual run!

As much as I can see their worth I can’t say I’m a fan, especially when I’m towards the front of the group and have to run that much further to catch everyone else, and then there’s the congestion when over taking….can you tell I’m not a fan??

Yes and was part of my motivation to get off working day/night shifts, since returning to Mon-Fri 9-5 I’ve loved having weekend back to run Parkrun and try and get to as many social runs as I can.

If you don’t share your run in social media, did it happen? Where do you log your runs and do you stalk others runs
Garmin and Strava, if it didn’t record it didn’t happen!

Favourite race distance and why

Tell us about your pre-race rituals and food and drink
I never eat anything in the morning before a race, just plenty of fluids before the race and pasta the night before, try to avoid bread and cheese

A nice 10k around Manhattan would be perfect, taking in as many of the landmarks as possible

Favourite race/event and why
Barcelona half was amazing for the race support along the route. I love running along the seafront on the Torremolinos half as well.

Favourite parkrun and why
St Albans, mainly because each segment works out to be around a KM each so it’s great to judge how you are getting on, and it’s a pretty nice setting as well with the backdrop of the Cathedral

What’s your one race essential?
Garmin