We managed to catch up with Sean O’Leary after he completed Race to the Stones in July 2017, this is what he had to say, so hey Sean how did the race to the stones go?

What can I say… I finished, which was the main goal.

The weather was ideal, some light rain in the morning, getting a little heavier in the early afternoon but the sun came out later to see us through the second half.

My Son-In-Law, Paul, dropped me off nicely in the morning but I missed my fellow Redway Runners heading off, so I went off with the next wave. This wasn’t a problem as I knew this was going to be a solo effort. That said, I met some fantastic people along the way. I did the last 20k with a Frenchman ( Franck Crosnier ) who saved my sanity by singing French marching songs, one of which about a woman and her lovers and another that was a bit rude to the King of England. Please see link https://www.youtube.com/watch?v=gSUiL6YYvu4

The support from the Redway Runners team was fantastic, popping up every 10k or so. At a lay-bys, outside a cafe. Lots of hugs and smiley faces all round. It was great to see Mike and Carol Webber looking cool and relaxed just before the rain started.

All was rosy up to half way…Leg was holding out quite well. I even managed to help a guy struggling to run into the half way mark. A minor blister on my little toe. So food and a plaster and I felt right as rain again. It was fantastic to see Zaid and Niam at the camp. After a few photos and hugs, I built up the courage to set off again. All good, let’s go……. 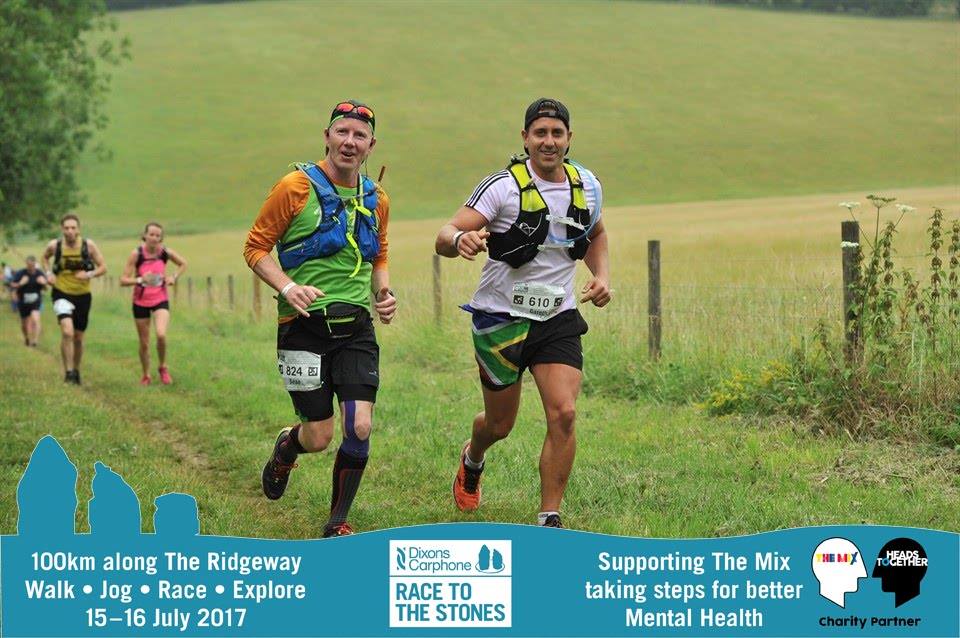 Why was it so hard to get going again, I just can’t say. The “walk hills..run everything else strategy…” really kicked in at around 60k.

Between 60 and 70k we were getting near Swindon and about to go over the M4. I put in some real effort to get going again as we were on a busy road but I was forced to stop by a fast car heading my way, so found myself in the verge. OK, off we go again but I think I’ve blisters on the ends of my toes now…How the hell.. Never mind, a very nice lady has just told us the next pit stop is just over the M4 bridge and off to the right, so I can sort myself out there.. I start what turns out to be the most horrible section of the race. I can feel every little stone and definitely feel all those big sharp pointy ones too. Turns out, that just past the bridge, must have been a good 7k..bad decision.

Eventually, I get to the pit stop. First aid..socks and shoes off, flat coke (with a spoon full of table salt) in one hand and a cup of tea in the other, I get some nice lady to look at my toes. “This could hurt she” said, with a needle in hand..well she wasn’t wrong. She popped the ones which still hurt and left the ones that I couldn’t feel any more. Then she said, do you have any pain killers….Doh, of course I do, so why didn’t I take them.. Obviously, the brain had stopped long ago. There were a couple of guys sitting next to me, one with issues a bit more serious than mine.

Off I go again, feeling a little better, with only 30k to go. Less than a marathon, how hard can it be. I even start running again on the flat. The light is starting to fade now but I am OK for a bit. Time for a sing song, so on the music goes. (whatever gets you through).

That French guy passes me, I pass him, he passes me again I catch him and we start chatting.. He has had to leave his friend behind. Wow what a difference some company makes as we get to 80k quite well.

Short break this time as it is getting dark. So, on with the head torches ready, can you believe that some people didn’t even bring one. A nice stretch through some fields, saw some cows, went around the cows. Lights go on and we make it to the last pit stop. Now, I haven’t said yet, but the people at those pit stops were fantastic. I think they must have had a competition going on. One guy said to me, “It’s you, we weren’t expecting you for at least another hour” .. You wouldn’t believe how much that cheered me up. The food was great, from the first pit stop to the finish. I didn’t want for anything (except perhaps a lift).

Off we go again, for the last 10k or so. Pitch black, with head torches on. (Thanks to Sara-Jane King, as mine is perfect for the job) Last bit of the course goes up, down sharply, up again and a long downhill to the stones. We even try to run the flat and uphill bits as we know the last downhill is too treacherous to run. We pass a guy on the phone, crying and telling his girlfriend that he needed to talk to someone and that no one has talked to him for the whole second half. People are asking how far it is to the end because their batteries have gone on their watches.. I check mine.. Battery low!! Never mind, only a parkrun to go.. I try to imagine myself going around Willen Lake. Not far then. We hit a tarmac path and start seeing lights coming the other way, it’s all a bit confusing but Franck explains that we go to the stones for a photo before coming back to the finish. He starts joking with people coming back, asking them if they had seen God when they touched the stones but no response from anyone.

We get to the stones, luckily we have head torches on as it was pitch black. A dismembered voice calls “Stand by the arrow and turn your lights out”. Thank goodness, it’s only the photographer. Flash, flash, flash…Thanks.. and off we go. Guess what, there’s another 1.5k to the finish. So back up the hill and into the field, turn left, keep going and we come across a guy losing the contents of his stomach. We stop to make sure he is OK, give him something to clean himself up with and make sure he has a drink before realising there are other people with him and it’s OK for us to go on. A couple of minutes later I can hear Liz May saying well done to people as she meets us at the last stretch.. Thanks Liz, for all the support, not just during the race but through all the training and life. OK, last little bit, we start as we mean to go on… we walk. 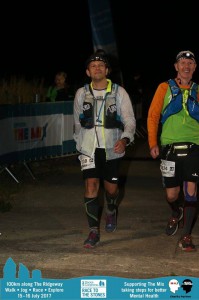 Over the finish line, Franck and I shake hands, maybe hug and go our separate ways in search of food and transport home. Burger and Slaw, cup of coffee in hand, I crash out on a yoga mat for some well earned rest. I finish my food in time to see Steve Morris and Paul “PJ” Jones safely in. Well done guys.

I have to say a huge thank you to the our Redway Runners support crew along the way. Mary Morris, Janet Maidment and Mandy Hockley, to name just a few. No offence to those I missed, the brain couldn’t take it all in. Thank you all.

You can read a further report from Neville Rowles click here