The alarm clocks rang at houses across Milton Keynes at ridiculous o’clock this Saturday morning, so early in fact that it was still dark!! The skies outside were cloudy and grey as we clambered into our chariots to make our way to some little village in Oxfordshire called Lucknow where we were to start a running race across some trail path to somewhere in deepest darkest Wiltshire and a circle of ancient stones.

Our Saturday group consisted on Pet Hedges, Kerry Cooper, Chris Mahoney , Sean O’Leary, Paul Jones, Steve Morris, Stephen Dunham, Mick Bates and Neville Rowles with Janet Maidment and Mary Morris coordinating the much needed ‘support and encouragement crew’. The Sunday team of Zaid Alani, Niam Hani and Louise Bailey were lucky as they were having an extra days rest We were also missing a few with Kevin Ferris, Amanda ‘one leg’ Holland and Ros Crawley having fallen by the wayside being sadly beset by injury. Rumour has it that ‘one leg was still considering running the event just a few weeks out despite being encased in plaster !!

We stood around, collected numbers, took photos and went for a wee in the usual chaos of a start area, filling bladders, grabbing snacks, slapping on Vaseline, bandages, rock tape kinesio tape, talcum powder and the lucky underpants. Paul was uttering quiet words of encouragement, Steve was still packing his bag (how he would cope without Mary is beyond me ) and Sean rocked up a little behind schedule. A few announcements were made and off the first group went with Chris, Mick and ‘Captain’ Kerry Cooper up running in the staggered start process. Pet then led us astray and we sneaked into the pen as most of us were in the second group to go and after a brief chat, decided in typical Redway Runners fashion that we didn’t need to hang around for the warm up and just shot off on our own about 5 minutes behind the first group

Now at this point it began to dawn on us what a silly stupid foolhardy idea this had been, usually most of us race 10Ks and Half marathons and so the longest we race most of the time would be for two hours or so. To make it worse, there were a couple of seasoned Ultra/trail veterans with us in Paul and Pet who a) Should have known better b) Should have talked sense to us !! So, anyway, down the leafy lane we went chatting away with either a mere 50k or 100k to go !!! After about 30 minutes Stephen dropped me, but having run with him before I was convinced his pacing strategy was all wrong and he would come back to me, oh how wrong I was !!!

I could waffle on about the event and give a description of what was going through each of our minds at various stages of the event but that has probably been well documented by our Facebook feeds and Janet and myself using Facebook live and Sean’s hilarious write up about his singing Frenchman. Anyway, needless to say the Redway team did an amazing job, the support guys were brilliant and seeing them pop up at some remarkably random places as one sprang out of the bush was superb. It was fantastic to see Carol and Mike Webber along. The weather to start with was warm with drizzle which was fantastic except for the point when we came across the first stretch of downhill chalk path (memo to self, compact chalk + water = slippery as a slippery thing )

The aid stations/pit stops were superb and I think it is fair to say that most of us made a damned good effort to replace every calorie that we had lost in the previous stretch. The selection available was amazing and would have tickled the fancy of many a Redway Runner with energy bars, cake, nuts, cake, gels, cake, chocolate, cake, oranges, cake , I think you get the picture. After going along a bit and down to the Thames valley and trotting through the lovely village of Goring we all knew what was coming and it was up, up, up. Anyway, not soon after half way was reached where some of us stopped, some of us finished for the day and some of us were starting the next morning. Unfortunately, I was in the group of extremely foolhardy ones who in our naivety had decided that as we can run a marathon, to chuck a few extra KM to do 100km non-stop on would be a piece of cake. For us there was no respite, no tent, no bar, no massage to have but more of the awesome undulating scenery of the Ridgeway. Apparently, we trudged through the Vale of the white Horse, the North Wessex downs, Grims Ditch and much more, according to all of the information we were given, ‘when you cross the Thames and head into the downs the scenery changes as it opens out into the classic sweeping views’ I honestly can say that I can’t remember them and I was barely looking further than 20 feet in front!

I think we all made new friends and chatted and ran with various individuals from other parts of the country and world just to keep us moving and spirits up. I think we all had really energised moments and we all had really terrible ‘what the heck am I doing this for moments’, but the best part is, all who started finished, which is a fantastic achievement. If you want to see how we did then the results are here, but this really is one occasion where speed doesn’t matter and getting it done does (well perhaps except for Chris who was first of our group !!) https://www.resultsbase.net/event/4047/results

So why did we do it? Well, all of us ran for charity, Stephen ran for MK Bridgebuilder trust, I ran for Cancer Research Uk and everyone else ran for the club charity Milton Keynes Hospital Charity. No that the muscles are beginning to recover, the chaffing is disappearing and the calories are being replaced it was really good fun.

There’s loads of photos available on our Facebook pages, so have a look to see what is going on there. The finishers were:

If you want to have a go at it next year I would highly recommend it, it is good fun and details can be found at http://www.racetothestones.com/

Thanks to Neville for the report 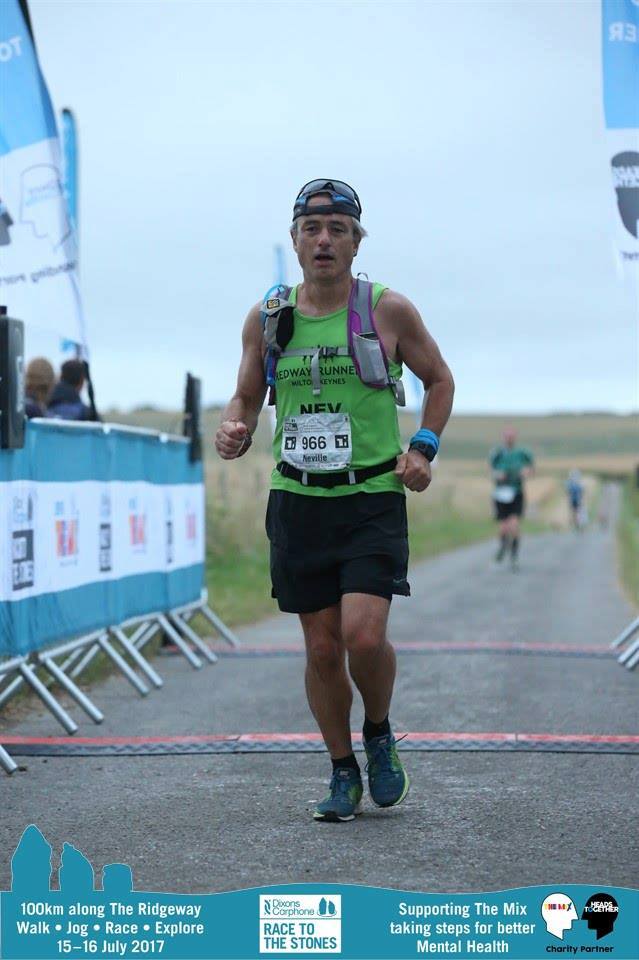