A royal Discovery run on Friday 16 September 2022 for 11 runners in Stony Stratford visiting the Queen Eleanor mural, then the possible site of the Queen Eleanor Cross, then on the return to Stony the Rose & Crown as:
—
Queen Elizabeth II
Queen Elizabeth died Thursday 8 September, 3 days later made the first part of her journey in Scotland a 175-miles by car in 6 hours.
Then Flew from Edinburgh to London
—
Queen Eleanor
732 Years ago
Queen Eleanor died at Harby near Lincoln in 1290 and King Edward I, spent three days in intense mourning, unable to leave the Nottinghamshire village of Harby where she died. He then led her funeral procession, journeying some 200 miles to London.
King Edward I escorted the body of his wife to Westminster Cathedral in London on a 21-day funeral procession en route to London and Westminster, they rested each night at locations subsequently marked by the monuments in the Queen’s honour and known as Eleanor Crosses.
The 12 memorial crosses were the largest but not the only part of Edward’s plan to commemorate Eleanor. Most unusually, Eleanor had three burials, and so was commemorated with three tombs. To preserve her body for its slow transport to the chosen burial place in Westminster Abbey, her entrails were removed as part of the embalming process, and buried in Lincoln. Her heart – carefully carried separately from her body from Lincoln to London – was buried at the London Black Friars.
Stony Stratford was around the middle of their journey and until the monument’s destruction in the Civil War in the 17th century, the Stony Stratford Cross stood somewhere near the Stony ford where Watling Street met the river Ouse.
Whilst a few other crosses have survived almost intact (at Geddington, Hardingstone and Waltham) and stood for over 700 years, the Stony Stratford Cross survived only half that time. It was destroyed during the Civil War that took place between Parliamentarians and Royalists between 1642 and 1651.
It cannot be certain what the cross looked like; no drawings remain and each of the twelve Eleanor Crosses was designed by different artists.
—
King Charles III
After the funeral on Monday, King Charles will have a coronation this is likely to be in the summer of 2023.But let’s go back to firstly:
—
Edward IV
585 Years ago
Elizabeth Woodville was born in about 1437 (no record of her birth survives), at Grafton Regis, about 5 miles away from here.
Edward IV had many mistresses, the best known of them being Jane Shore, and he did not have a reputation for fidelity. His marriage to the widowed Elizabeth Woodville took place secretly and, though there is no documentary evidence of the date, it is traditionally said to have taken place at her family home in Northamptonshire on 1 May 1464. Only the bride’s mother and two ladies were in attendance. Edward married her just over three years after he had assumed the English throne in the wake of his overwhelming victory over the Lancastrians, at the Battle of Towton, which resulted in the displacement of King Henry VI.
Edward IV met Elizabeth in Stony
Elizabeth Woodville was crowned queen on 26 May 1465, the Sunday after Ascension Day.
—
Edward V
539 Years ago
Edward V was never crowned, so was ‘de jure King of England’ and ‘Lord of Ireland’ from 9 April to 25 June 1483 at 12 years of age.
Edward V spent his last night of freedom in this pub- The Rose and Crown.
Edward and his brother Richard were taken into the “inner apartments of the Tower” and then were seen less and less until the end of the summer to the autumn of 1483, when they disappeared from public view altogether.
The princes’ fate after their disappearance remains unknown, but the most widely accepted theory is that they were murdered on the orders of their uncle, King Richard III
—
Hope all enjoyed the synergies with current events
—
Top Photo with the Queen Eleanor Mural
Bottom photo at the Rose and Crown 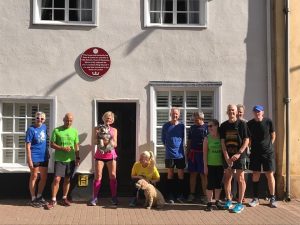