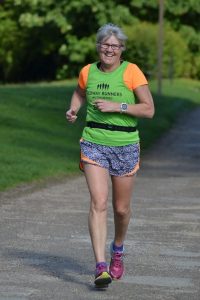 I have come a long way since taking up running with the Redway Runners back in 2016. I started with Leigh’s step-up group, who happened to be a friendly bunch of runners. Who knew you could run and talk at the same time?? After that first session I was hooked, line and sinker.

As the month’s passed by, I went from running once a week, to three times a week with the club. I was getting fitter and stronger and became more conscious about my health and well-being. I joined a gym and picked up swimming again. Life seemed pretty good! Well it was until Redway Runners in 2017 ran an evening on multi-sport, which I went along too. That night a seed was planted in my head. Come the following morning I was on my computer researching what are the distances for a triathlon.

Although there was no follow-up from the multi-sport evening, I did strike up a friendship with Burti Montagu-leon, who was one of the speakers. In fact, if it wasn’t for Burti’s support and generosity I’d be in a right pickle. There was more to this Triathlon business than I originally thought.

Having never cycled on the roads before, I thought it was prudent to join a bike club. So, I joined Broughton Cycling Club, who just happened to be starting up a Flourish Programme for beginners. Sounded perfect, and just what I needed. The programme, not only helped with my bike confidence skills, but I also met some fabulous people, some who happened to be Redway Runners.

To cut a long story short I entered several sprint triathlons in 2017 and 2018. With each triathlon I became less anxious, and my confidence grew as I gained experience. There were some events that I preferred to others, but that’s another story. In December 2018 my son Alexander and I had a mad moment and signed up for the Ironman70.3 in Rappersweill, Switzerland. What was I thinking?? To get my training on track I asked Campbell Noon for a training programme and had just 6-months to get Ironman70.3 fit. 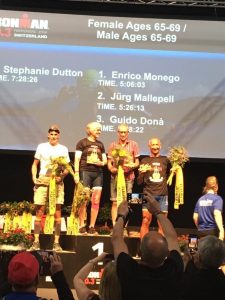 The months flew by and before I knew it, the big day arrived. In June of this year I crossed the finishing line in 7:28:26, with less than 2-mins to spare before cut-off, which was 7.5 hours. I was the only woman in my Age Group (65-69) and happened to be the oldest woman on the course. I don’t think I’ll ever forget that moment of sharing the podium with three extraordinary winners (look at their times). Amazingly, I managed to qualify for the World Championships in Nice in September 2019. It’s all very exciting and daunting at the same time. For now, my training is keeping me grounded.

It’s hard to believe where I’ve come from, to where I am now. But, it hasn’t all been plain sailing, I’ve been injured many times, which set me back in my training.  There’s been many a tear shed, mainly with frustration and endless questions of “can I do this, I’m I too old, what if, what if?”

When I was a Redway Runner beginner’s run leader (2017/2019) I often heard the beginner’s say, “I can’t do this, it’s too hard.” I would reply “yes, it is hard” particularly as we get older, but with time and patience, the mind and body adjust, and we get stronger and fitter. With the right support and mind-set, the beginners started to believe they could reach their goal. When their big day arrived, I used to get so excited for them. It was such a magical moment in seeing the beginners complete their first 5k Parkrun. 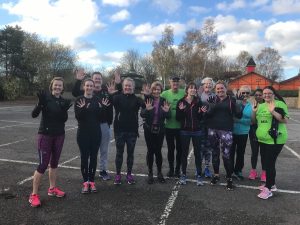 From my perspective it was a pleasure to be part of their fitness journey. I learned as much from the beginners as they did from me. And you know what I totally understand where they are coming from…it’s a massive achievement!

Redway Runners and BCG have played such an important role in my fitness journey. I’ve met some inspirational people who have inspired me to be the best I can be. Without all of those people who supported me, I would not be on this journey, which I love! Life is still pretty good even with triathlons in my life.

Thank you, Redway Runners you are a wonderful club, you embrace all ages, and welcome all abilities. You were the rock on which I built a fitness for life.

Since being a run-leader I’ve now gone on and qualified as a Level 2 British Triathlon Coach, and coach at my local junior triathlon club (https://www.tri-mk.co.uk)

No matter what your age or ability, if you are interested in learning more about triathlons please drop me a line @ stephaniedutton@aol.com

“Running is the greatest metaphor for life, because you get out of it, what you put into it”