Full of trepidation, the eight of us met in a cold but Sunny car park at the back of Tongwell lake to prepare for the onslaught of the day. Someone somewhere had come up with the idea of running a cross country relay and seven of the eight of us had been rather foolhardy in putting our names forward!! We divided ourselves between two cars and prepared for the journey from Milton Keynes to Mansfield. After a brief stop at the services to make sure that Paul caught up and didn’t get lost again we went in a small convoy to the course!!

We arrived to find a packed course with literally thousands of runners hanging around, looking serious and clearly knew what they were doing. Nerves began to take over with trips to the toilet, panic buying of spikes and removing the general malaise from the journey. In typical cross country fashion we were rather relaxed about the preparation, despite the rather star studied field that awaited our presence. We took advantage of the facilities and did a few laps of the athletics track to warm up, and figured that a jog around the course was of no value as we would either scare ourselves silly or get completely lost!!

As we had split into teams designated by the car loading we had James Down, James Armstrong, Martyn Douglas and Paul Mizon in one car (AKA the non-fun bus) and then Aidy Maidment, Neville Rowles, Stuart Sullivan and Simon Read in the other (the fun bus) The order of running was allocated and we prepared to race!! 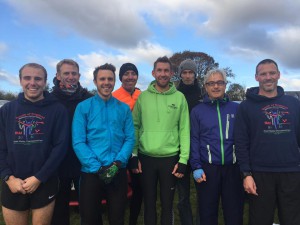 A few stretches ensued and some banter between the non-fun bus and the fun bus teams about who will win and that the losers will subsequently buy the beers ensued. Aidy and James went into the start area ready for their race, at which point we all realised that we had drawn the short straws as they first leg was shorter than the rest (a fact vehemently denied by the first leg runners who claimed that they ran just as far but they had to do it on the flat whereas we had to go downhill !!)

There was an announcement on the tannoy and suddenly the first leg runners disappeared around the corner followed by a large bang and some cheering. Next thing we knew there was a crowd of them running around the lake. We prepared to figure out what to do next as of course none of us had any instructions, had not read any and didn’t listen to anything we had been told!! Some simple points like how does the handover work would have been useful!! Fear not, there will be a few teams ahead of us and we will figure it out we agreed!! Shortly after, the leaders came through on their first lap and to say that they were motoring would be an understatement!! Not long after, the green of redway could be seen with the bobbing head of James Down at the helm, the non-fun bus cheered but their cheers were soon quietened by the appearance of a rather fresh faced Aidy Maidment hot on the heels of Mr Down. They disappeared behind the lake into the wonders that we were soon to discover and the second leggers had to strip off and get ready to go.!!

James and I kept our kit on as long as possible to protect against the biting elements (its cold up north don’t you know) before finally succumbing to the demands of the officials and going into the handover area.!! Well, describing the handover area as chaotic would be an understatement!! It was like a bunfight at a nightclub bar on payday Friday with one barperson who was on their first shift!! I have to say that I’m not quite sure what happened next, but there was lots of shouting and before I knew it I saw James fly by and James ii speed off, I’m going to get him on the first hill I thought (in my dreams, he must have 30 years on me !!) Anyway, James was a softy running in gloves and a hat so I could see him clearly, whereas the rest of us were true ‘hardened cross country fellows’ as you do, in our flappy shorts and brief singlets!! (fools!) Suddenly, before I knew it, Aidys head popped over the hill and I dashed to the handover line as they called my number and I went off like a rocket!!! Yep, started too fast again and it was down hill !!!

Well, we sauntered on lovely patch of grass around a very pretty lake before a short sharp climb at a gap in the trees, a lovely fast decent across a bit of mud before having another short sharp climb into the trees !! Then began the viscous cycle of short sharp climbs and rapid descents before emerging from the treeline into the Nottinghamshire tundra where the temperature dropped by about 30 degrees !!!! At this point I understood James’ logic of wearing the hat and gloves and cursed my foolhardiness!! Mind you, I could see him in the distance and in my own deluded mind I was catching him up !!! (sadly not ) A lap of the tundra beckoned with a brief respite from the elements before embarking onto the downhill part of the tundra before returning to the uppy downy routine from before as we then flirted with the start finish area, however, they were teasing with us as we were sent around again !!! Cruelty to senior citizens I’d say !! By now I was absolutely blowing from all angles and despite being freezing cold was running ‘flat out in top’ as they say !!

The strategy from me became a quest for survival and to lose as few of the places that Aidy had given me as possible whilst accepting that my ambitious plan of catching James was at best somewhat flawed !!! Anyway, despite my low morale at this point I was encouraged extremely well from the other team members and all of the support and felt like a real star, despite feeling like I was backpedalling. I had actually passed a few people on the first lap, however, this was offset by being passed by some of the faster ones who had snuck onto leg two !! (Don’t they know the rules in relays, slowest person always goes second !!) Next thing I knew, (I had barely passed the first corner of the lake at this point) I could hear heavy breathing down my neck so I put on a spurt to hold them off and make them suffer !! , well this lasted for all of about a millisecond before I was spattered in dust, mud and the debris from the first three objects which I later discovered were the leading three in close competition. Someone mentioned that it one of them was a chap called Andy Vernon, who apparently is very good at this running lark !! Well, the bugger didn’t speak to me and he left me eating his dust !!! Worse thing was realising that I was a leg two runner on my second lap and he was a leg three runner !! Shaken, but not stirred, I saw this chap about my age (yes, there were some others over 50 !!) in front of me and had him in my sights !! In the aftermath of the event, James claimed to have held up Andy Vernon, slowed him down and then run alongside him as a kind of ‘have a go if you think you’re fast enough’ kind of challenge, although the rest of us think he was being somewhat economical with the truth over this !! The finish beckoned, not before long I thought as the second lap passed in a blur having failed in my goal to catch the dastardly James !!

I’m not sure what happened next, but Martyn from the non-fun bus team had by then removed his jeans and shoes, decided to do a warm up and went off with his massive strides to churn up the course and to set right the wrongs of Andy Vernon. Sadly, I didn’t witness any of Martyn’s run as I was dazzled by the fluorescent orange of Stuarts brand new spikes that had burned the back of my retinas!! Stuart, despite being in the ‘bigger boys bus’ had ventured onto the course with both gloves and hat, this despite wearing spikes that you could have seen from Mars!!

Before I knew it, Martyn was in and Paul was, in his typical way, off like a whippet across the course, shortly after, the glow of orange crested the hill which could only mean the arrival of Stuart back to the fold and the departure of Simon. Well, Paul must have eaten something special on the stop off at Starbucks, or had a double espresso or something as he positively flew around the course, despite the fun bus leader Simon throwing his all at him he just could not make up the damage caused by my overly keen start speed!! Paul came around on the first lap with his feet barely touching the ground he was going so fast only to be passed by Andy Vernon doing a ‘gentle warm down lap !!. Simon was in keen and hot pursuit, but his legs still had some of the effects of the rather fast Marathon he had recently completed in them and despite running fantastically he couldn’t make it all up against a supercharged Mizon.

We gathered together post race to dissect performance and to analyse how we had got on and then checked on the results. There were 166 finishing teams, more than that started but we are not sure how many!! The non fun bus (Youngsters !!) came 96th and the fun bus team came 128th. A pretty successful day out, especially as Milton Keynes B team were beaten by us as were Sparkhill Harriers and Rolls Royce, we also managed to mix it with the big boys in the playground and not get burned!! And, if age grading performance was taken into account, I think that you may find that the fun-bus team absolutely blitzed the non-fun bus, but we won’t argue about that will we J

Everyone behaved and admired the talent running before them and with them from a respectful distance, well, that is except for one member of the team, who shall remain nameless, who fawned at the feet of a certain Mr Andy Vernon like Baldrick before Blackadder and had a selfie with him and then got him to autograph his number.

As none of us had remembered our protein refuelling powders we opted for the next best thing, a burger, chips and a pint followed by a Jeigermeister or two in the nearest Witherspoons (not the drivers , we only let them eat !) A great result, great fun and celebrated in typical Redway runners style. Fastest lap : Paul Mizon. Rest of us all pretty close (well, if you call a three minute spread close !)

So, who’s up for parliament hill and the Southern Cross Country championships then, we need at least 9 or perhaps we can get two teams in?

Next event up in the South of England cross country championship at Parliament hill (15k for men, 8k for women) January 28. Would be excellent to get as many as possible to this event. Only £7 entry. If interested message Paul Mizon or email him mizonp@hotmail.com

More info and results at:
http://www.englandathletics.org/england-athletics-news/ecca-national-cross-country-titles-decided-at-mansfield