We asked Theresa Randall for her running journey – this is below: 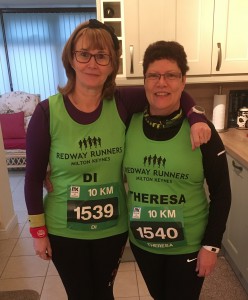 March 2015 I decided to start running. It all came about because my youngest Son (Justin) kept on at me to do something to keep fit and he said running was a good way to do it. I was 57 and yet to be convinced. All my life I had avoided anything that involved exercise. I enjoyed Tennis and Netball at school but never saw the fun in running around the playing field getting wet and cold. I preferred to be in the gym, hanging upside down on the exercise bar! I’ve joined a few gym’s over the years, but as soon as the novelty wore off I’d be bored.

So, I challenged Justin to help me start running, he flatly refused. Right then, I thought, I’ll show you, I’ll do it myself. With the help of my oldest Son (Jason) and the encouragement of my Brother (Steve), I took the plunge and downloaded the NHS Couch to 5K app and did my first ‘run’ to see how I got on. I did about 3K and it took me 35 minutes. I was out of breath, my wobbly bits wobbled a bit too much for my liking and I ached all over once I got home. I did two more ‘runs’ then I went on Holiday for a week. Walking round New York for five days and I had time to reflect on whether I wanted to take this running lark seriously, and I decided that yes, I did. I got back from Holiday and took myself off to Sweatshop and got kitted out with running shoes and a sturdy support bra.

That was it, on the 6 April 2015 I became a ‘runner’ I gave myself a goal and signed up to the St Albans Half Marathon 5K that was taking place on 14 June 2015. Steve was running in this and I knew Justin was thinking about doing it, I just had to make sure he did. I never told him what I was doing so all my training had to be done in secret and the occasions where we ‘crossed’ on the doorstep I had to pretend to be going to Zumba, or a brisk walk.

I’d seen people running around Milton Keynes in green tops with Redway Runners across the front, but hadn’t really taken much notice of them. I thought they were an elitist running club and not to be approached by the likes of me. How wrong was I. Jason had found out that they were starting a beginner’s course, so a few weeks before the St Albans event we joined, and it was the best thing I could have done. The club were so welcoming and encouraged everyone to take things at their own pace. Glen’s Beginners Course ran for 10 weeks and taught me how to warm up / warm down, and what I should be doing to make it work for me. At the end of the 10 weeks was a graduation 5K parkrun, eek! My first training session 5K was on 7 June 2015 and I did that in 51 minutes.

Meanwhile, my secret training was paying off and the day had come to go to St Albans and put into practice everything I had been training myself for. Justin still had no idea what I was doing until the morning of the event. I couldn’t sleep the night before due to excitement and nerves all rolled into one. I was up and getting ready before he had surfaced and when he did, he asked me what I was doing up so early on a Sunday morning, I then had to tell him that ‘some of us have a run to do today’ The look on his face was priceless. Off we trundled in the car down the M1 and by this time more and more people were becoming aware of what I was going to do. Messages of encouragement and good luck were pouring through by text and Facebook, I felt really chuffed with myself that I’d managed to keep the secret for so long. Arrived at the event and it was raining, but I didn’t care, I was here to do my best. I’d set myself a target of 50 minutes, I completed the 5K in 45:50, result!

ter St Albans, I threw myself into the Redway Runners beginners course working towards the graduation parkrun on 25 July 2015. Over the weeks I was getting stronger and a bit faster session by session. Graduation day arrived and I paired up with my run buddie and off we went. Half way round, and Justin came back to run with me once he’d finished his parkrun. Between the three of us I managed a finish time of 43:03. I became a fully-fledged member of Redway Runners and I carried on with parkrun, even finding one in Eastleigh when I went to see a friend for the weekend. I have now done 18 parkruns and managed to get six PB’s, my best being 38:49. I invested in some EVB shorts which I saw advertised in Women’s Running magazine – yes, I’ve even gone as far as to become a subscriber – and they support your core as well as hold everything in place! I wouldn’t be without them. The magazine is brilliant, full of tips and inspiration, it’s become my Bible.

I went on Holiday in October 2015 to Antigua and took my running gear with me. I managed to do some training up and down the beach at 7am before the sun was too hot.

I hurt my back just before New Year so put myself out for about seven weeks. Got back in time to start training for the 6 March 2016 Milton Keynes Festival of Running 5K which I have just taken part in with a time of 38:57.

So far, I have managed to knock about 13 minutes of my 5K run time from that first attempt in June 2015. I have more 5K runs lined up this year but want to progress onto 10K’s. I said I’d give myself a year of 5K’s then start to go a bit further. I’ve tentatively said I will be ready to sign up for my first 10K at the Milton Keynes event in March 2017, I don’t like to rush things. 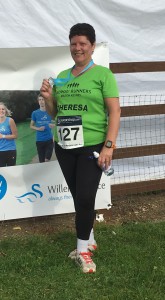 have thought a year ago I would be where I am now, I certainly didn’t. Anyone that says to me ‘I don’t know how you do it, I couldn’t’ I tell them to start with the Couch to 5K programme and find a good running club. If I can do it, anyone can. Once I’d taken the steps to do this for myself, Justin has given me some great support and encouragement. He’s been there when I’ve felt I can’t do it, he’s run with me to push me to get PB’s and we spur each other on now. He is my inspiration to do better each time. The support from Glen and the Redway Runners has been phenomenal. It’s just one big happy family with no egos to get in the way, we all want the same thing and that is to keep fit and stay healthy. Jason gave up after we’d run St Albans but still supports and encourages me to be better. Steve just keeps going and he has made me a medal hanger which holds 20 medals, I have 3 at the moment so a long way to go to fill it up.

I love my running life, I just wish I’d found it sooner.

After the 2016 Milton Keynes Festival of Running, I met another Redway Runner (Di) who seemed to be about the same pace as me. We started to do parkruns together and became Runbud’s. Di wanted to step up to 10K as well so we decided to start training and signed up to do the Bournemouth 10K in the October of 2016. We were both nervous on the day but we had great support from fellow Redway Runners, who we now know as ‘The Green Army’ The weather was great, the sun was shining but not too warm and then we were off. We stuck together as much as we could and really enjoyed the run. Based on my average parkrun time I was aiming for a finish time of 1hr 20mins, I managed 1hr 15mins! I was over the moon and so was Di as we crossed the finish line together. 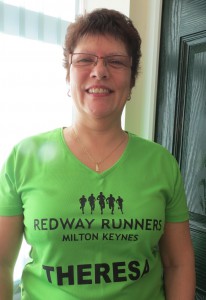 hen I’ve completed another 5K MoRun and knocked just over 2 minutes off my previous time. I’ve done 2 MK Rocket 5K’s with a PB of 34:32 and Women’s Running 5K in 2016. So far this year I have completed the Milton Keynes Festival of Running 10K, numerous virtual runs with Virtual Runner, Women’s’ Running 10K, with Cosford Spitfire 10K with my brother and Bournemouth 10K with Di again to come, hoping we can beat last years time. Justin is still running with Redway Runners and we usually meet up at the club runs on a Monday. Jason ran the Milton Keynes Half Marathon this year and Steve completed the London Marathon.

I’ve helped out at new beginners courses run by Redway Runners and buddied runners at their graduation parkrun, as well as marshalled parkrun, Silverstone Half and Milton Keynes Marathon weekend. I get just as much satisfaction helping someone else achieve their goal as I do achieving my own. Redway Runners set up their own virtual run over Christmas 2016 which they called the 12K’s of Christmas, I completed mine by running Christmas Eve parkrun, Christmas Day parkrun and I even made Jason run the last 2K with me on Boxing Day before I went to a friend’s wedding!

I’ve suffered with a bad back for so many years, which was my excuse for not running, but apart from the seven weeks break I had because I was being lazy over Christmas and New Year, I’ve had no problems since. 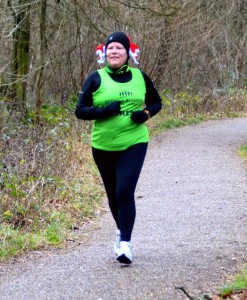 a lot but I’m proud of what I have achieved.

So far I have encouraged 2 of my friends to start with the beginners course and my Husband (Eric) will be joining the course starting in September.

I don’t profess to be the best or the fastest and I will increase to half marathon distance eventually, but if my story inspires anyone else to get off the sofa and start running that’s a job well done! What started as a bit of a laugh to prove a point, has now turned into a way of life I don’t want to give up.